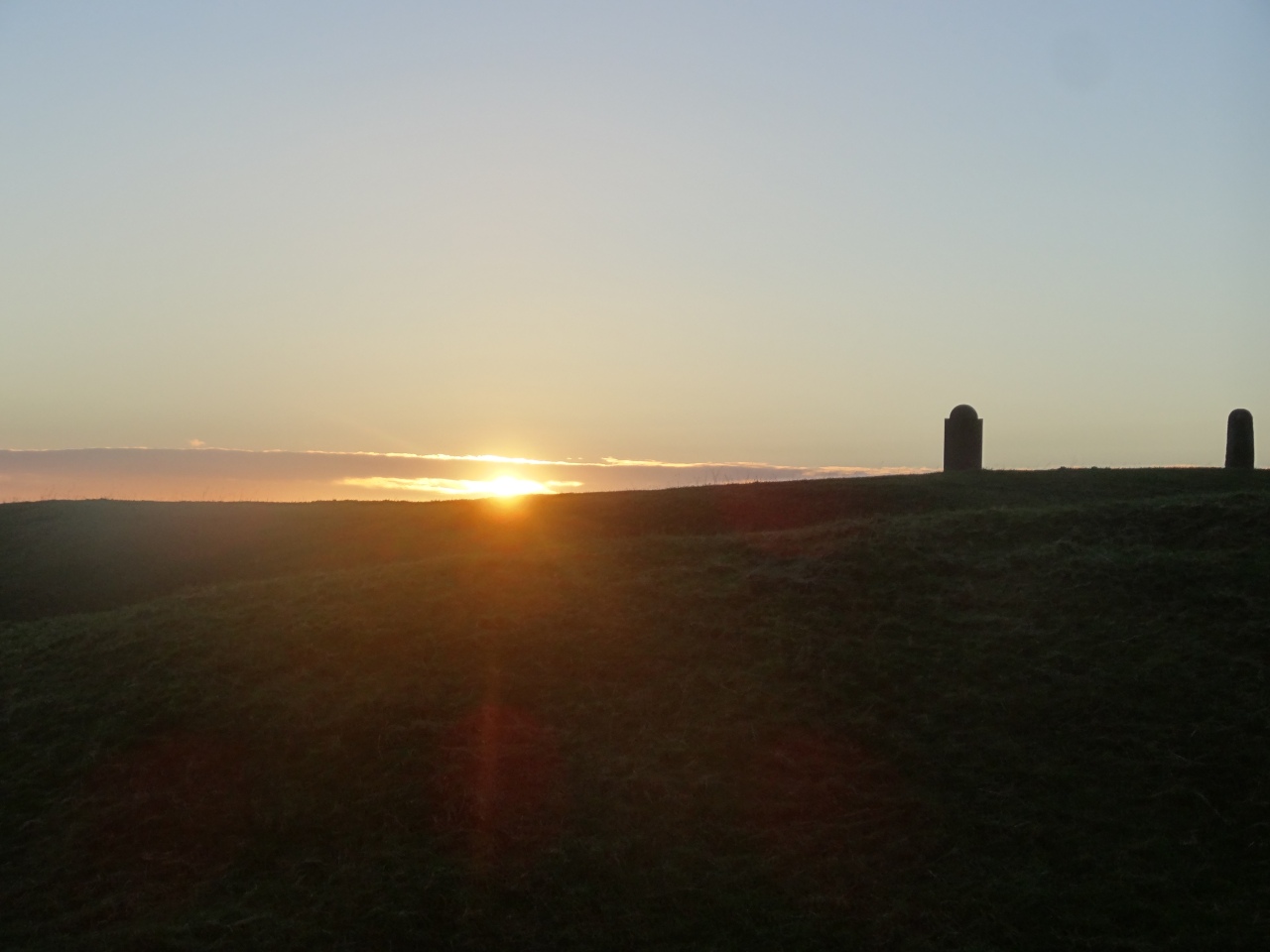 Sometimes, when city life palls, I don my boots and head out to County Meath and the hillforts and burial mounds of  this historic landscape. This is one of Ireland’s most beautiful rural landscapes, peppered with archaeological and historic sites, along the beautiful valley of the river Boyne. 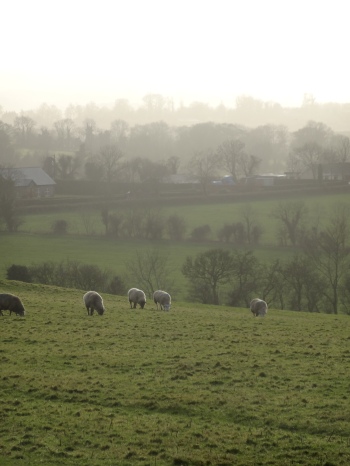 Invariably, I end up climbing the Hill of Tara, most beautiful at sunset. It takes some imagination when standing here, to conjure up images of High Kings, druids and tales of yore, yet there is something intrinsically atmospheric, almost spiritual, about this landscape. 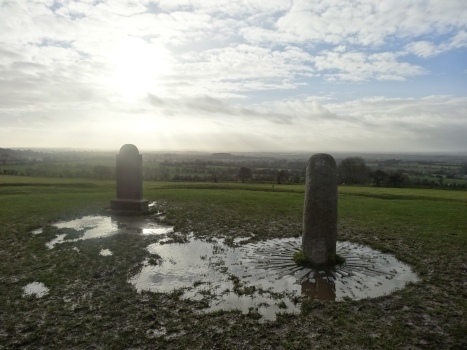 Looking out across the counties of Leinster from the Hill of Tara.

There are no obvious stone dwellings, just ditches and hills, best seen at dawn or dusk when the sun’s rays are low. But human habitation has been recorded here from the Neolithic era, 5000 years ago, with occupation for over 3000 years, in the Stone, Bronze and Iron Ages. 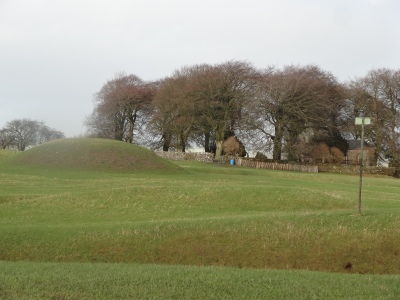 The ditches and mounds representing human occupation from the Neolithic, Bronze and Iron Ages.

A stone pillar stands sentinel; this Lia Fáil  is associated with the inauguration of the Kings of Tara. 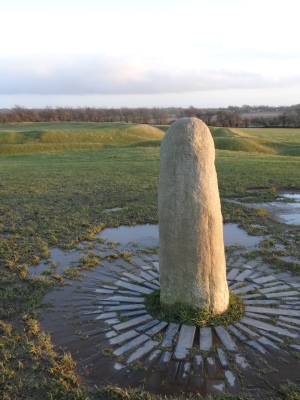 The Lia Fail, or Stone of Destiny, with the mounds visible behind.

When studying archaeology, “ritual significance” was a term we always used when we were unsure of something’s function. Certainly the stone’s phallic shape suggests fertility; the fertility of the land and livestock was essential to survival. Its prominent placing suggests importance – perhaps High Kings were inaugurated at this spot or, more likely, religious ceremonies centred on it. Nearby a 200m linear avenue cuts through the landscape, suggesting a processional avenue.

Certainly St Patrick was concerned about Tara’s significance and sought to confront paganism at this, its principal site. 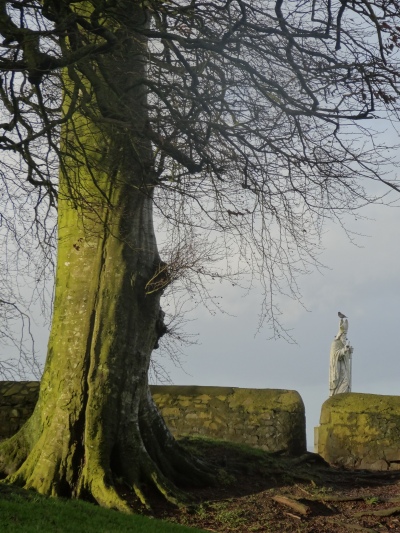 St Patrick’s statue on the Hill of Tara.

One hundred and forty-two Kings are said to have ruled here, their stories lost in the myths and legends of Celtic lore. The five principal roads of ancient Ireland converged here and a short distance away are the passage tombs of Bru na Boinne, Newgrange, the largest and most important megalithic complex in Europe, the 700 examples of swirling spiral patterns carved on the stones making this, also, a foremost site of megalithic art.

On the Hill of Tara itself, is a smaller passage tomb angled so that it catches the sunrise on the Celtic festivals of Imbolc and Samhain. 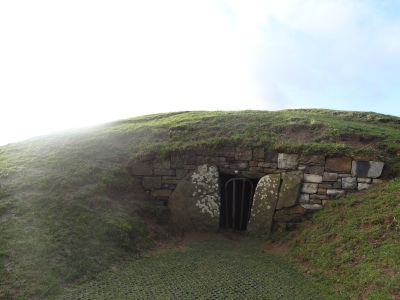 The passage tomb on the Hill of Tara, constructed c 3400 BC.

The noticeboard by the gate describes Tara as “Ireland’s most revered ancient landscape”, a place where “monuments, myths and memories combine”. Clearly the old ways die hard, a new “raggy tree” has emerged here in recent years. Traditionally, rag trees were sited near “holy wells”, usually a hawthorn tree, where rags were tied with a wish or a prayer. 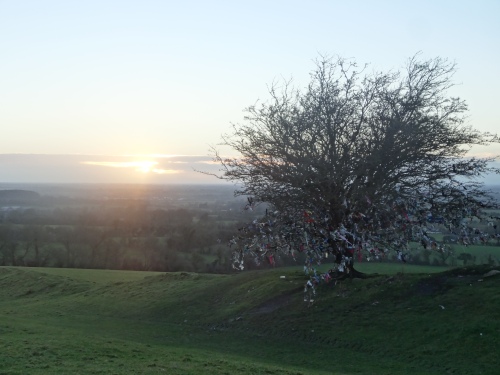 Rag tree on the Hill of Tara

I mentioned earlier here  how I found out my birthday is associated with the Hawthorn, according to Celtic Ogham tradition. To the Celts, nearly all trees had magical powers attributed to them, especially the ash, oak and the thorn. The Yew was revered by druids who made their wands from its wood; it was a symbol of immortality, probably based on its longevity, and is still commonly planted in Christian churchyards. 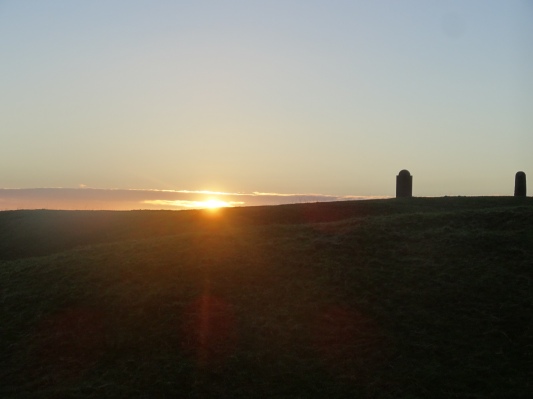 Sunset on the Hill of Tara

Archaeology can supply the physical links, historians, poets and writers fill in the detail. With the wind whipping my hair on a chill dusk sunset, it’s easy to see why this site held such a fascination.

Visiting the Hill of Tara.

It is entirely free to visit the Hill of Tara, now owned by the State.

Parking can be found nearby, as can an excellent cafe, Maguires, and a small gift shop. More here. 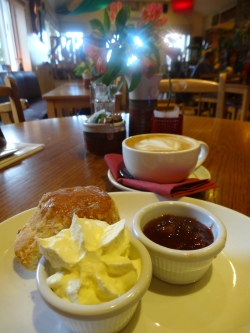 The whole area is rich in historical and archaeological sites, as well as being set in attractive countryside.

More about other sites to visit here.

“Season of mists and mellow fruitfulness...” (John Keats)
Much needed rain this morning but it’s rather grey, so a rosy peachy glow from Rosa ‘Easy does it’, ‘Tequila Sunrise’ and ‘Sparkle’
Love Kniphofia ‘Bee’s Lemon’, how the lime-green matures into sulphur-yellow. Great in a late summer border.