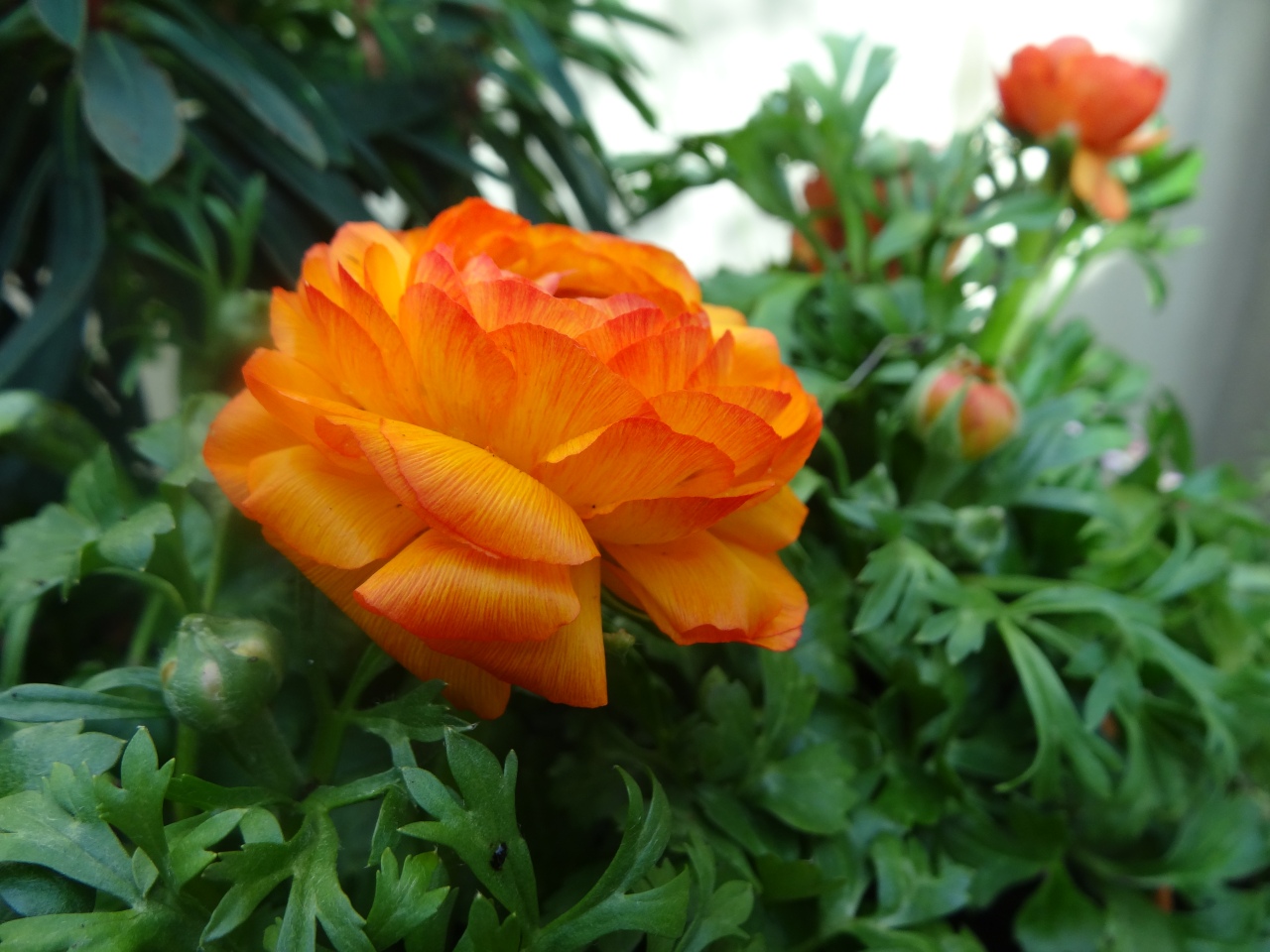 I love orange. I have at least one orange bag, orange suede gloves, more than one orange scarf .. you get the picture. But orange in the garden .. it took me a while to warm to it… orange marigolds in municipal bedding schemes always looked, well, a bit, unpleasant. And when I saw orange plants next to pink ones, I felt ill. 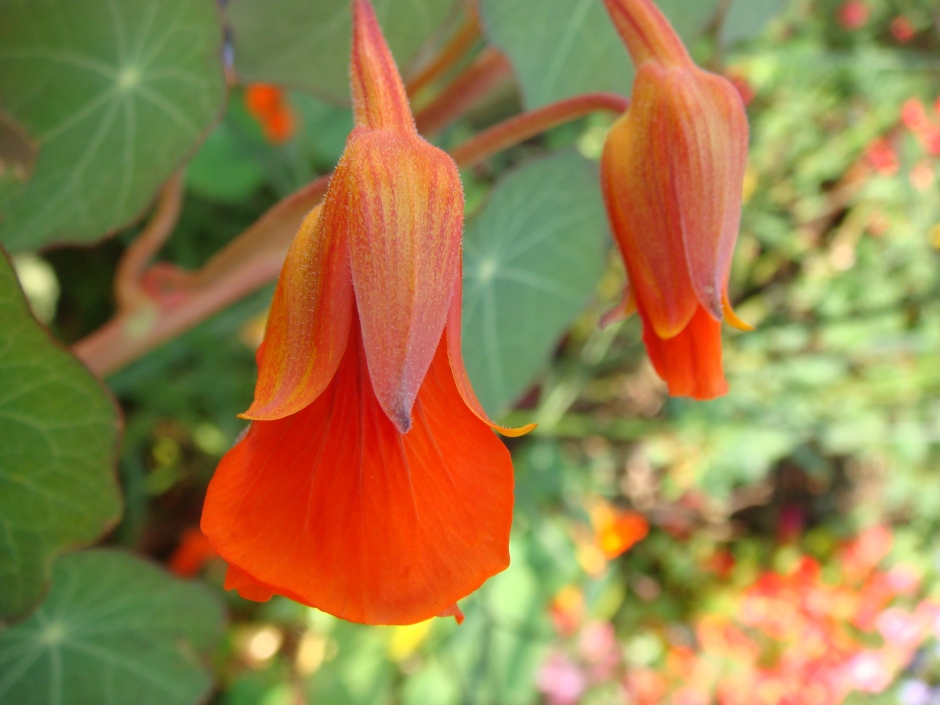 Orange lies somewhere between yellow and red and therein lies its strength. It adds warmth and it’s cheerful, and increases the impact of its two primary colour components, red and yellow. It’s used on lifeboats and buoys because of its visibility, so it’s seen as being an extrovert’s colour (hmm, rethink the orange gloves?), and attention-seeking. Carrots, pumpkins, oranges, apricots and  other vegetables get their orange colour from carotenes, a type of orange pigment. 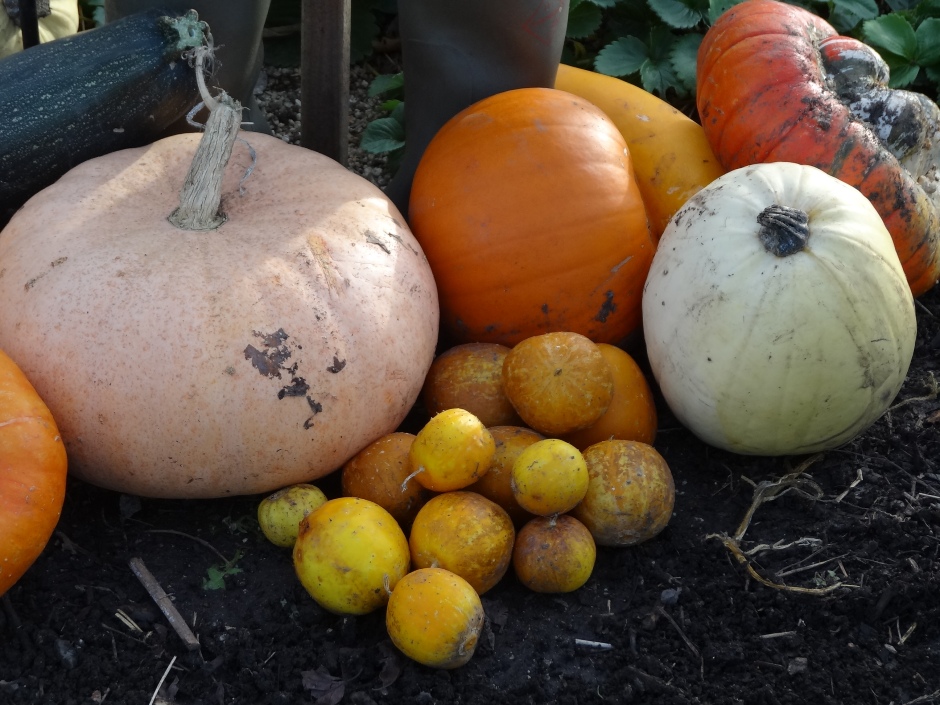 It’s the colour of autumn and Halloween and the national colour of the Netherlands, with its Royal House of Orange, (and hence Orangemen in the 6 Counties in the north of Ireland, supporters of a 17th century Dutch King). 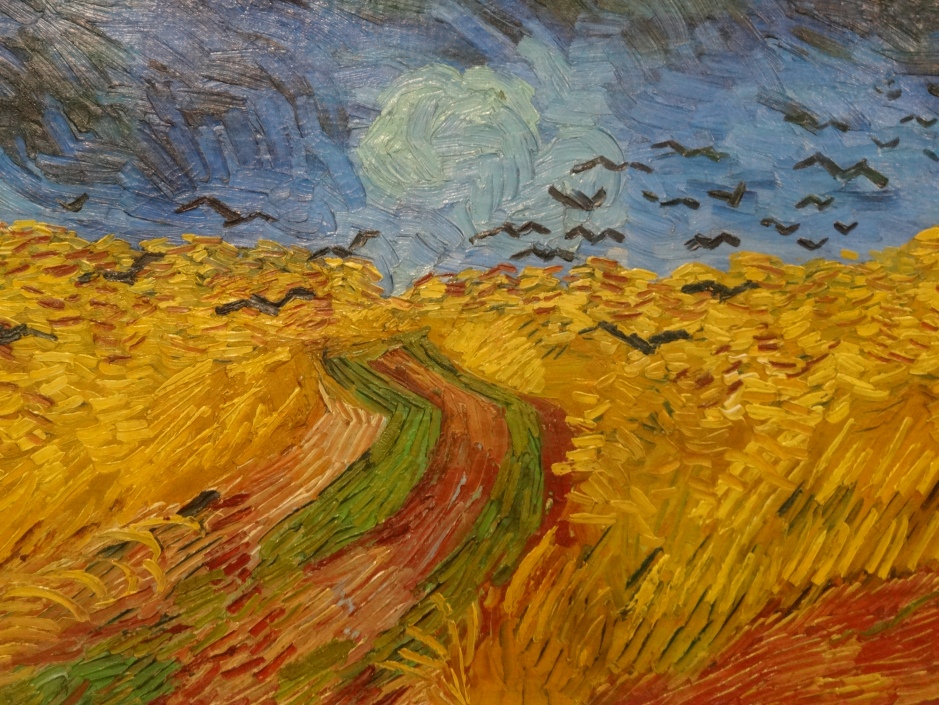 So, when orange is planted with blue, its colour is intensified. Here, orange is used as an accent colour, intensifying the blue which might look bland otherwise. 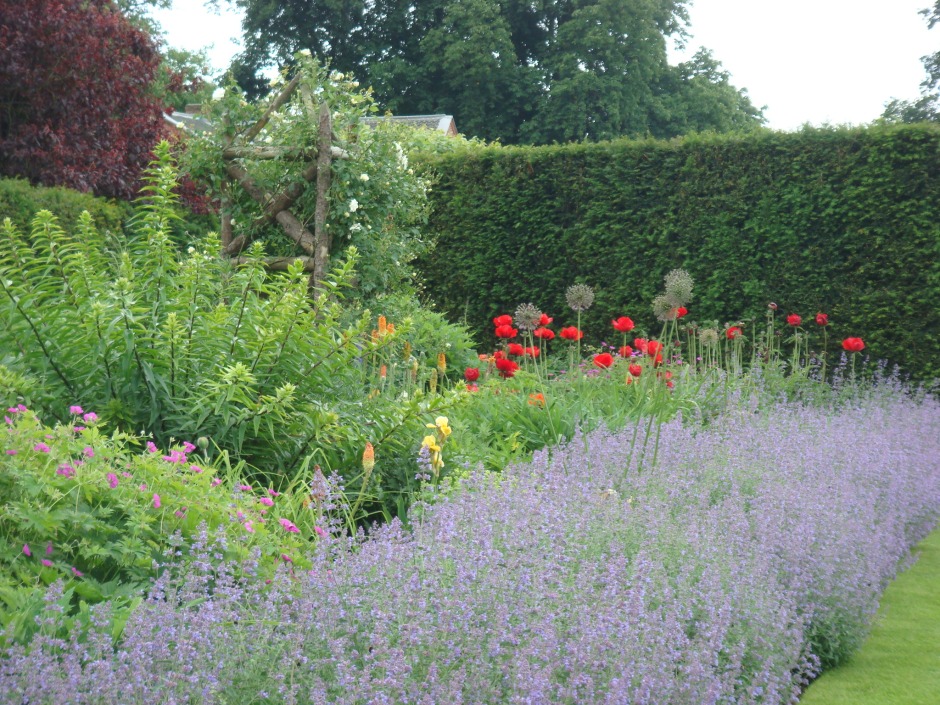 A late summer pairing of Heleniums and Agapanthus, not as successful – the two colours jostle for attention; using one as an accent colour would have been better. 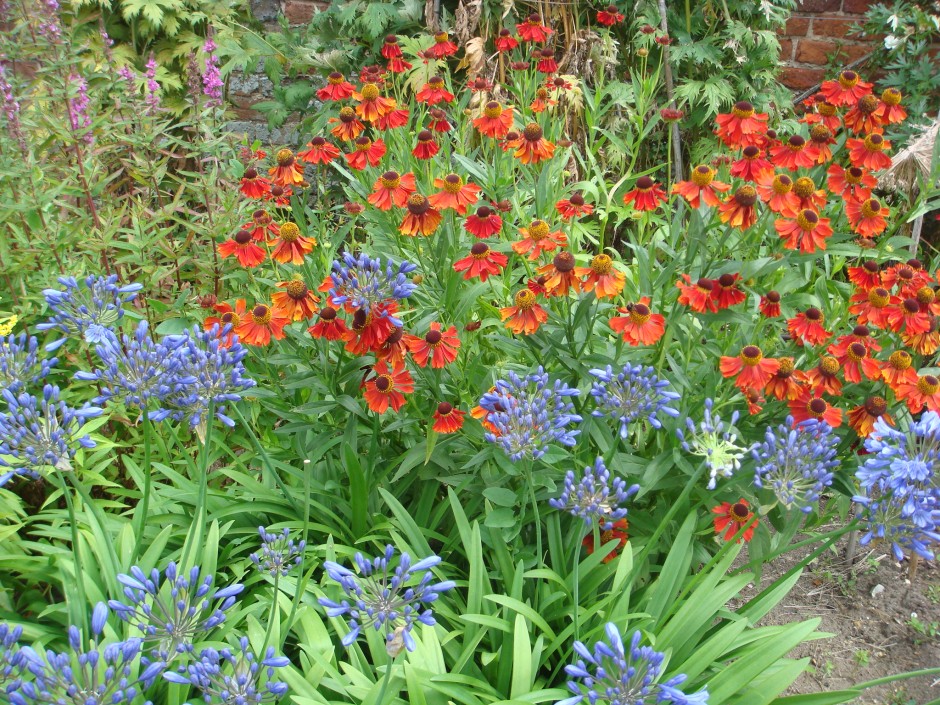 Orange-and- blue combinations do not need to be confined to just plants : 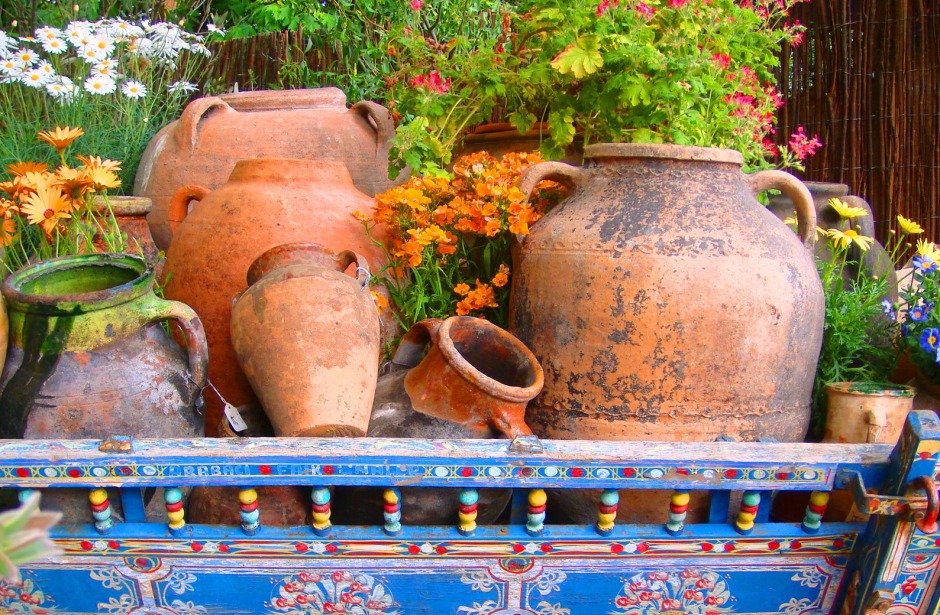 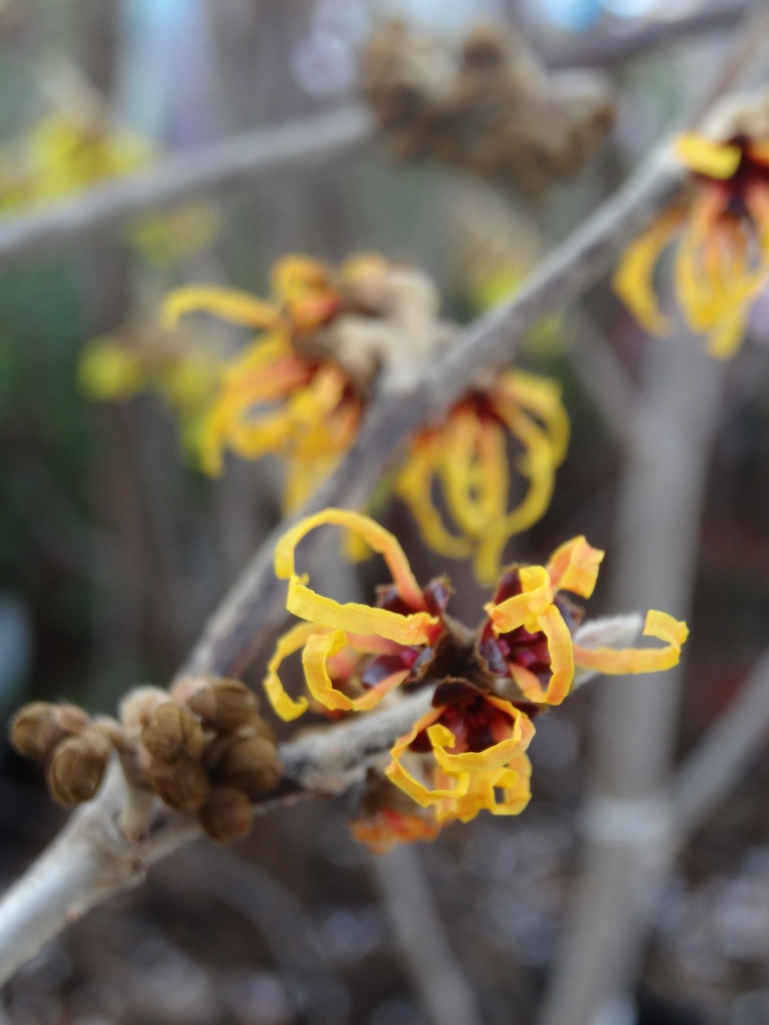 Orange isn’t a colour much associated with Winter and Spring but there are some wonderful orange tulips – ‘Orange Emperor’, ‘Anthony Eden’ a beautiful double, ‘Orange Princess’ and many more. These orange tulips will really pop in your borders or pots when teamed with their complementary colour – blue muscari or bright blue forget-me-nots. 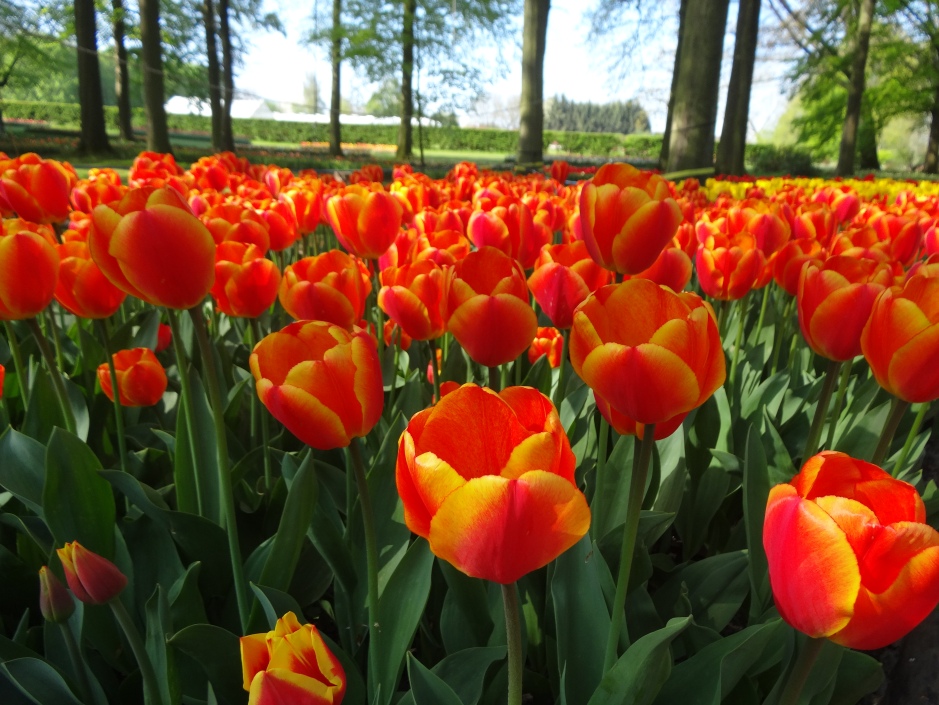 Bridging the gap between the demise of the tulips and full-on summer, is Helianthemum, its bright orange flowers look striking against grey-blue foliage. 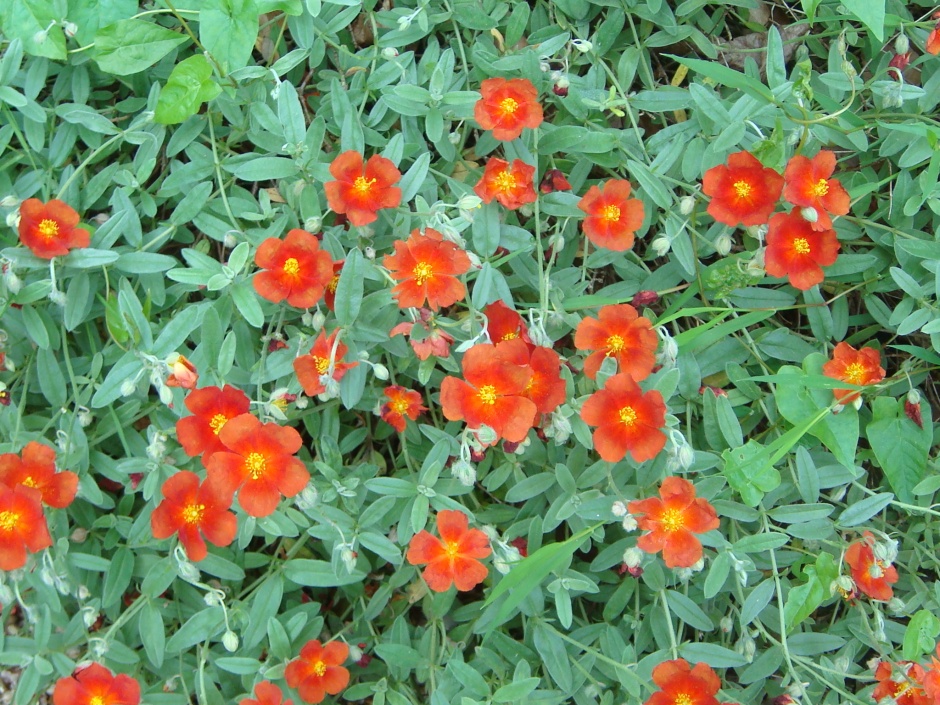 Bringing tropical looking orange Canna or Strelitzia out of their winter hiding, will add drama to your summer garden. Strelitzia, also known as the Bird of Paradise flower, sports its own orange and blue pairing. 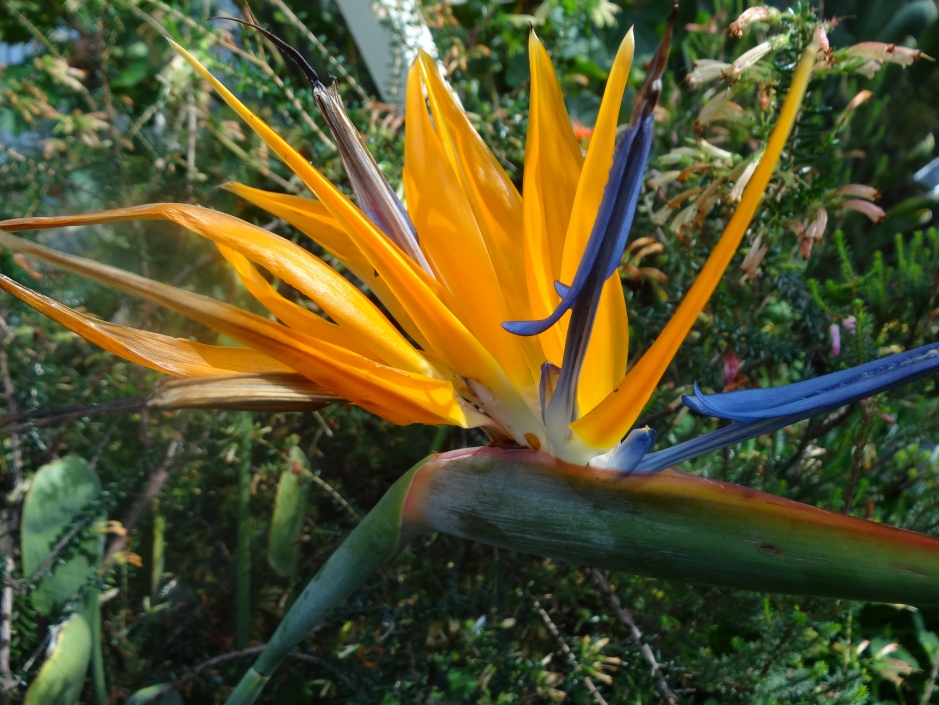 Orange and other colours.

Orange and yellow come in many tones, and can make comfortable companions in a toning border. In summer there is plenty of choice ranging from peachy orange to intense tangerine. 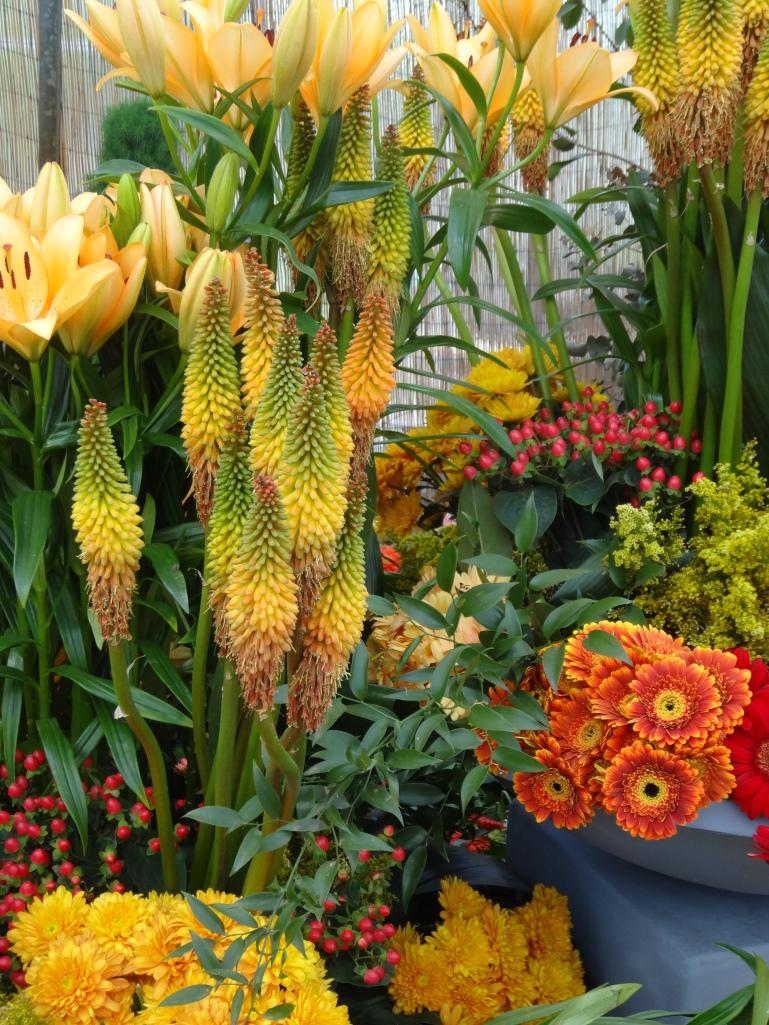 Shades of yellow through to orange 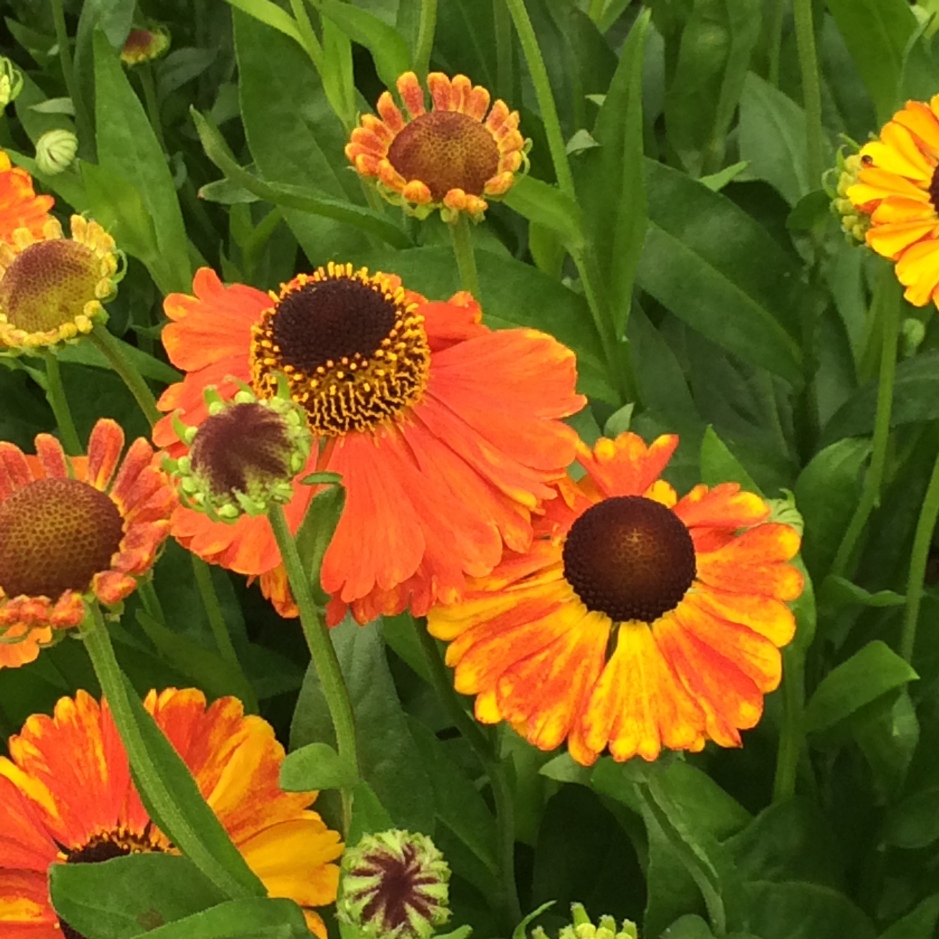 These rich warm shades are just the antidote we need this summer after unrelenting rain or snow. 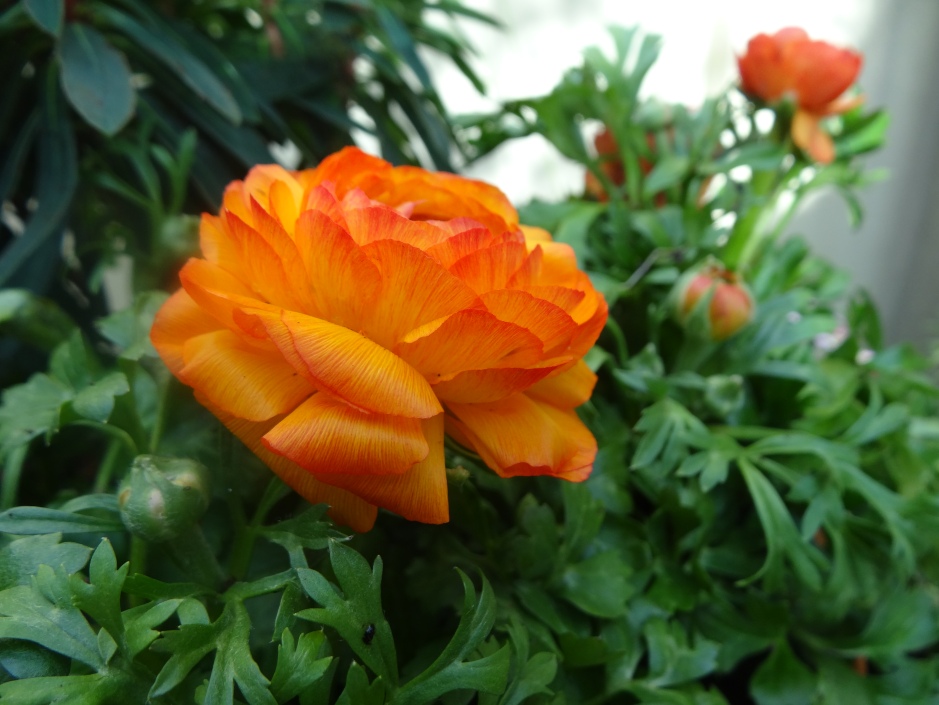 And who could be without orange, in all its hues, in the autumn? It is the most beautiful of shades glowing in the low autumn light. 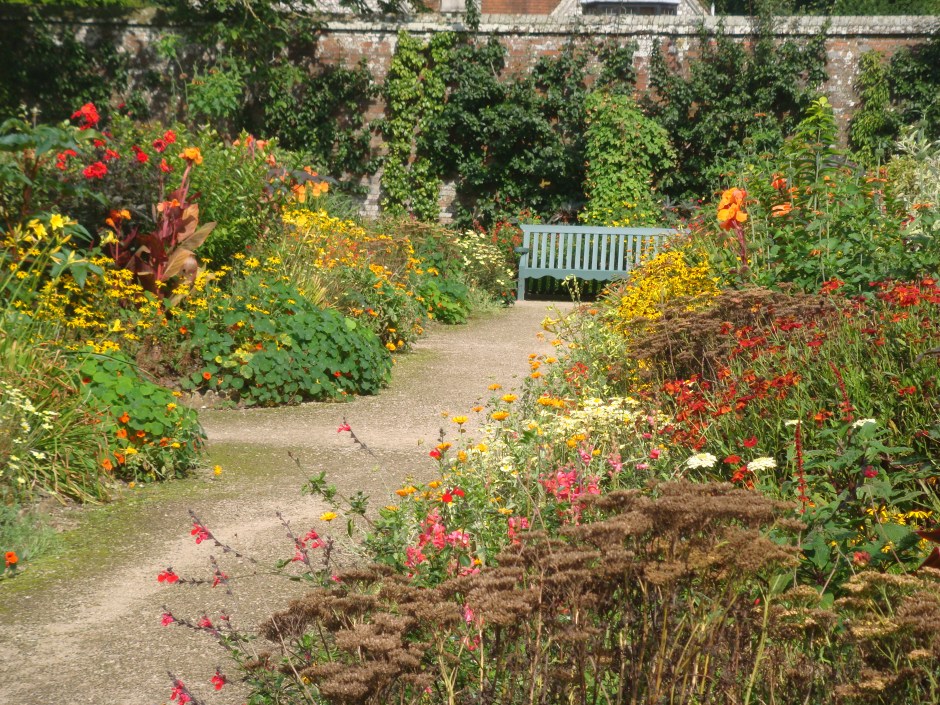 A blue bench against autumn colours 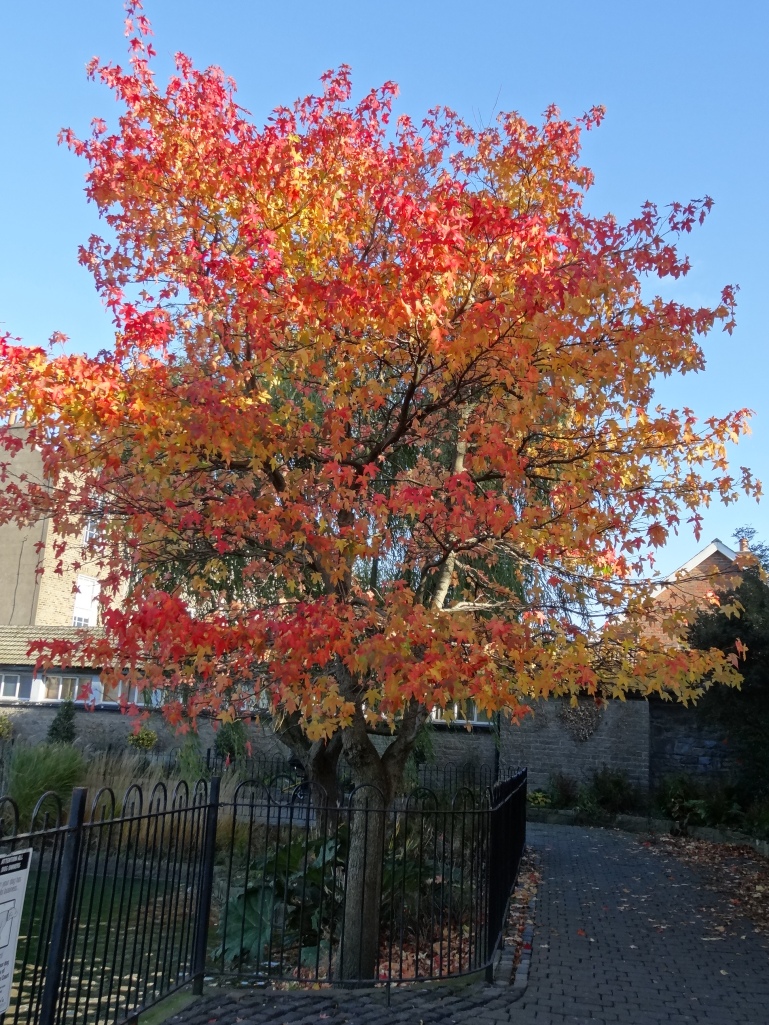 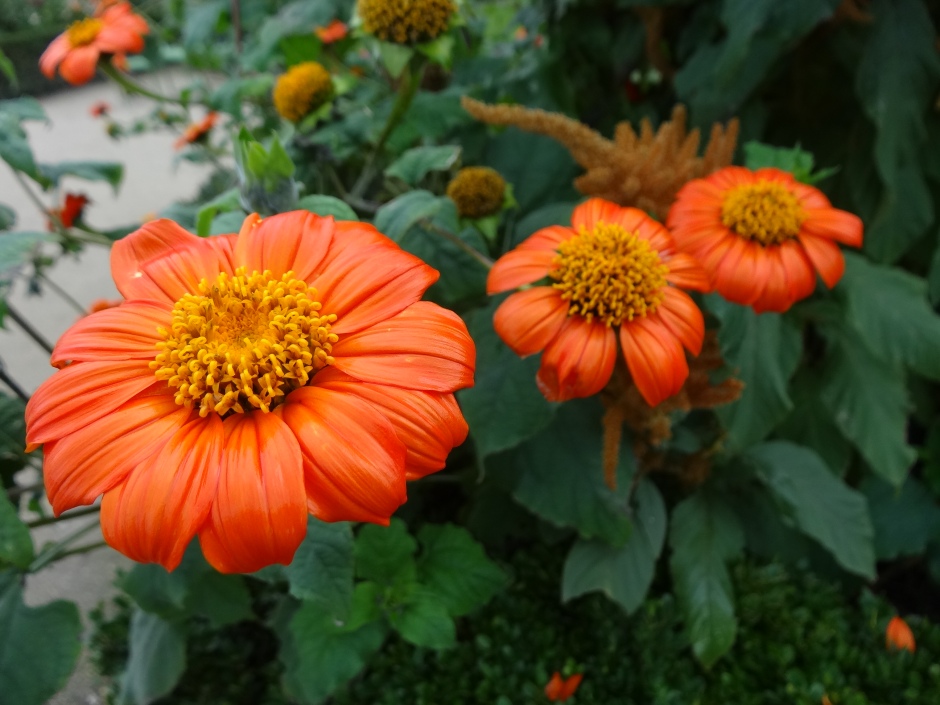 That great guru of using colour in the garden, Christopher Lloyd, once wrote : ” Many perennials are of naturally bright colouring; it is among their great assets and we should value it as such, not bend over backwards to gentrify it..”. He berated “timid gardeners” for missing out on “the thrilling opportunities presented by colour contrasts”. 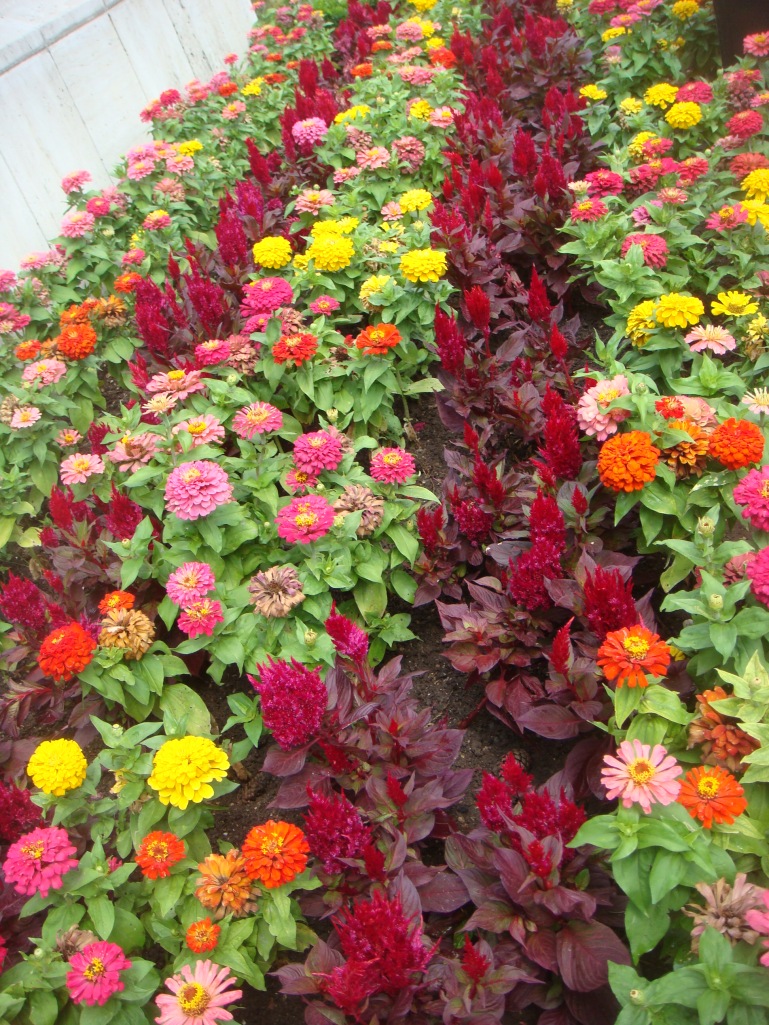 I saw this extraordinary planting scheme in Ankara – boldly planted with such confidence , it undermined all my previously held notions of good taste.

I loved it! And no doubt Christopher Lloyd would have too! 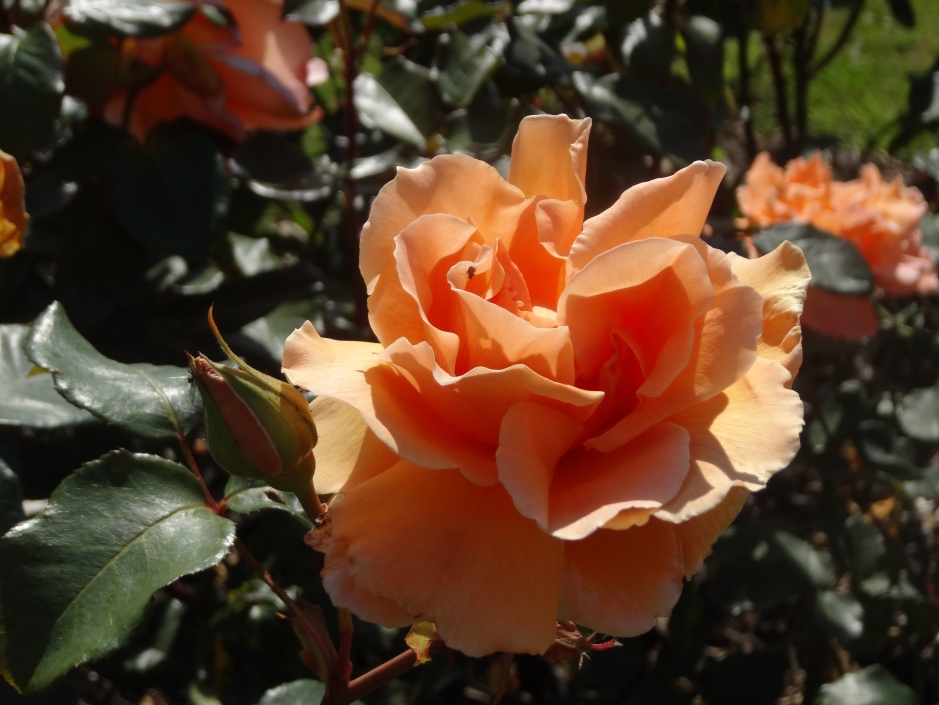 I won’t be recreating it but I will be embracing just a little more orange excitement in my borders.

17 thoughts on “Orange – not just for extroverts”