Driving the regional Chief and a backseat full of advisors to a festival concert on the shores of Lake Malawi isn’t my usual day in the office. But there are so many unique and wonderful aspects to this arts and music festival, ‘Lake of Stars’, founded by Will Jameson in 2003 to generate revenue and exposure for Malawi. I visited last year and this year I was back as a volunteer. 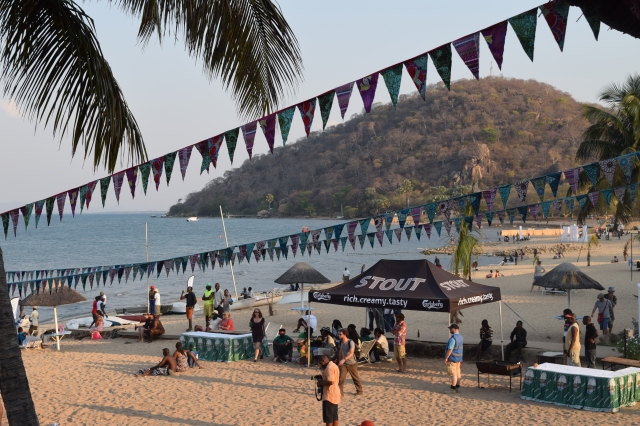 The view from the beach bar.

First of all, the stunning Location: three stages scattered along a white, sandy, palm-fringed beach backed by Lake Malawi, and in the distance the mountains of Mozambique. Dance the night away on the sandy shore and recover on the green lawns of the Sunbird Nkopola Lodge. Surely the most beautiful festival location. 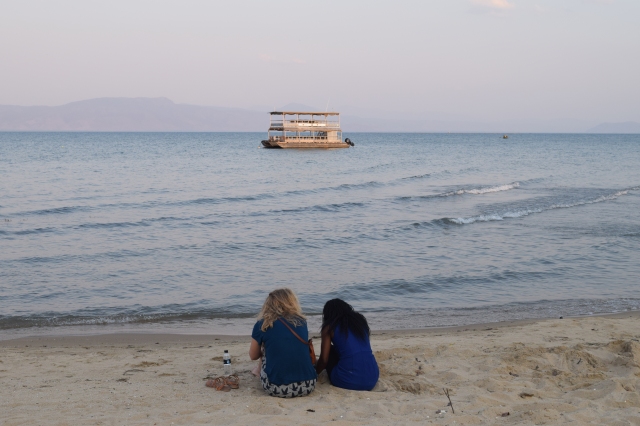 The Laidback Vibe is certainly influenced by the setting, the fairly intense heat, but mostly by the genuine friendliness of the Malawian people in a country referred to as “the warm heart of Africa”. The festival crowd, about 4,500 people, is fairly diverse, largely Malawian but with visitors from South Africa and neighbouring countries, NGOs and backpackers from Europe.

The site is a good 4 hours drive from the capital, Lilongwe, but there are shuttle buses and transfers to take you to a range of camping sites or lodge accommodation around the festival. The journey will give you a glimpse of Malawian life as you pass villages packed with stalls, goats meandering in your path, large numbers of cyclists balancing unwieldy loads, and then the scenery changes as you near the Lake and the bloated unreal trunks of the baobab trees loom into view.

In the land of baobab trees.

If you are keen to see more beyond the festival gates, ‘Lake of Stars’ organises many  Outreach activities in nearby Chipoka village – learn how to grind corn and make nsima or join a game of football against the locals. The festival helps support a number of local initiatives – after the festival is over, the stages will be dismantled and the wood used to make desks for the local Mwana Africa school, the solar lamps will be donated to the village, and the festival itself offers much needed work to local carpenters and handymen.

Before the festival gates were opened for the 3 day event, a Concert was held for the villagers of Chipoka, which was why I found myself driving the regional Chief as Guest of Honour to open the festival.

Waiting patiently for the concert to begin.

The festival is an arts as well as a music festival, so there are writing workshops, film-maker discussions, cultural dancers, Burundian drummers, poetry and so much more.

But of course you’ve come for the music and it certainly doesn’t disappoint – over 80 bands, local, regional and international with a range of music over three stages for three days. I was bowled over by brilliant performances from South Africa’s ‘Uhuru’, the afro-fusion brilliance of Zimbabweans ‘Makoomba’, and the crowd loved electropop queen, ‘Toya Delazy’. Malawian favourites ‘Konkalazi’, ‘George Kalukusha’, ‘Lucius Banda’ and more, had us all singing, dancing and swaying. But from Scotland, Mercury Prizewinners ‘Young Fathers’ provided us with an electrifying performance on Saturday night – far beyond my expectations. Truly memorable. And I’m delighted to say how incredibly nice they were offstage. 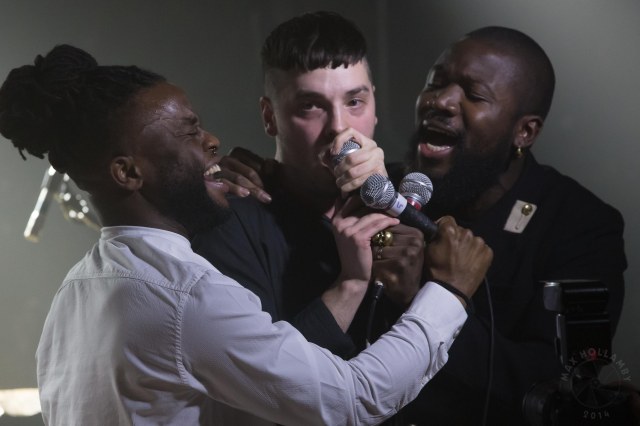 On the final night we were treated to a total eclipse of the moon as the music faded into memory. And then that magical Lake of Stars festival experience … sitting at the water’s edge as the sun rose from behind the mountains of Mozambique.

‘Lake of Stars’, a unique and unmissable event.

Malawi is a beautiful country, well worth exploring in all its diversity, and tourism brings much-needed revenue. So make a holiday of it after you’ve visited the festival. Ethiopian Airlines now offer a flight from Dublin to Addis Ababa and from there it’s an easy 3 hour flight to Lilongwe. I flew via Amsterdam and Nairobi. There are also long distance buses from neighbouring countries.

2 thoughts on “Lake of Stars, a unique festival experience.”