News had broken that weekend that Sir Roy Strong’s garden, The Laskett, had been rejected by the National Trust and he would therefore have it destroyed after his death. What a furore ensued.

So I was mildly surprised when I was asked onto Vanessa Feltz’s BBC Radio London programme on the Monday to give my response. Did I think he was behaving like a petulant child? Should it be destroyed?

Creating a garden is a very personal thing. We pour our creative spirit into them, nurture them through cold winters and hot summers, delight in the successes, despair at the failures, take cuttings from granny’s garden and accept seeds from gardening friends.

Gardens are often about memories. And love.

Sir Roy Strong, and his late wife Julia Trevelyan Oman, set about creating their formal garden around their home, The Laskett, in rural Herefordshire, forty years ago. Both had successful careers – Sir Roy was Director at the V&A in London, and Lady Strong, a very successful set designer, yet there was often little money available.They gradually  laid out their garden, transforming a 4 acre field. As each “room” was created, it commemorated an event or success, such as a published book or a well-received Opera design, which had brought in enough money to fund that next stage.

Thus a very personal garden evolved. Not something created instantly, as we see in miraculous makeovers. Neither had horticultural training, yet both possessed creative, talented minds with a deep knowledge of the past.

And therein, to me, lies its charm. It is inextricably linked to their story, their relationship, and created by them with passion. Visitors to the garden are provided with a plan and an audio guide, explaining the evolution of this somewhat eclectic garden. Pleached trees, holly, box and yew topiary, statuary and vistas lead the visitor onwards. 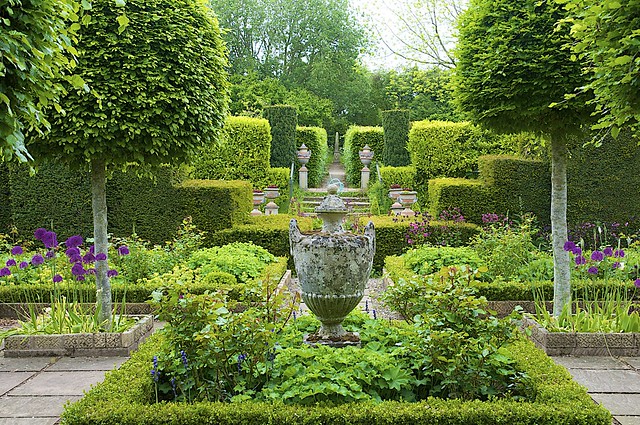 It is a quirky garden too with hints of turquoise and an assortment of objets, yet relies heavily on its evergreen structure, flowers are very much secondary.

Roy’s first book on the making of the garden was a very entertaining read; a great read for non-gardeners too.

He, and his late wife, wished to see their legacy maintained after his death and, with a substantial endowment, approached the National Trust to take on the guardianship. The garden was rejected by the National Trust in that it failed to “reach the high rung of national and historic importance”.

Strong later announced plans to have the gardens “destroyed” on his death.  A sad end to a lifetime’s work.

So what was my response on the radio show ? It is always sad to see a garden lost, or perhaps it was a very clever piece of PR, drawing attention to the plight of The Laskett. I’ve no doubt visitor numbers will go up and the announcement certainly made all the national papers. Or perhaps his pride was hurt; something very personal was being rejected.

What will happen to The Laskett?

Somehow I don’t think we’ve heard the end of the story.

6 thoughts on “Will Sir Roy Strong destroy The Laskett?”