An early morning mist sweeps in from the North Sea but nothing can detract from the myriad of colours stretching through the trees and down to the lake. 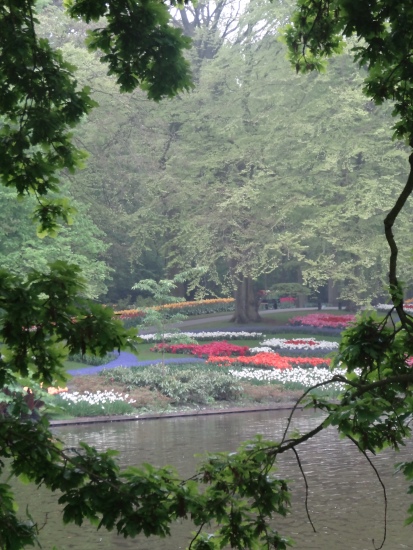 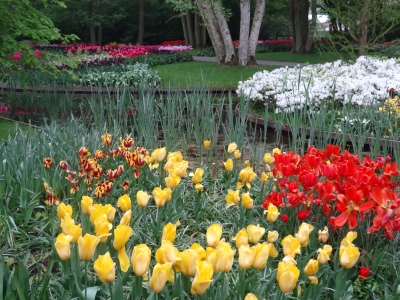 This is the world’s second largest flower garden, Keukenhof in the Netherlands, almost 80 acres filled with 7 million bulbs. 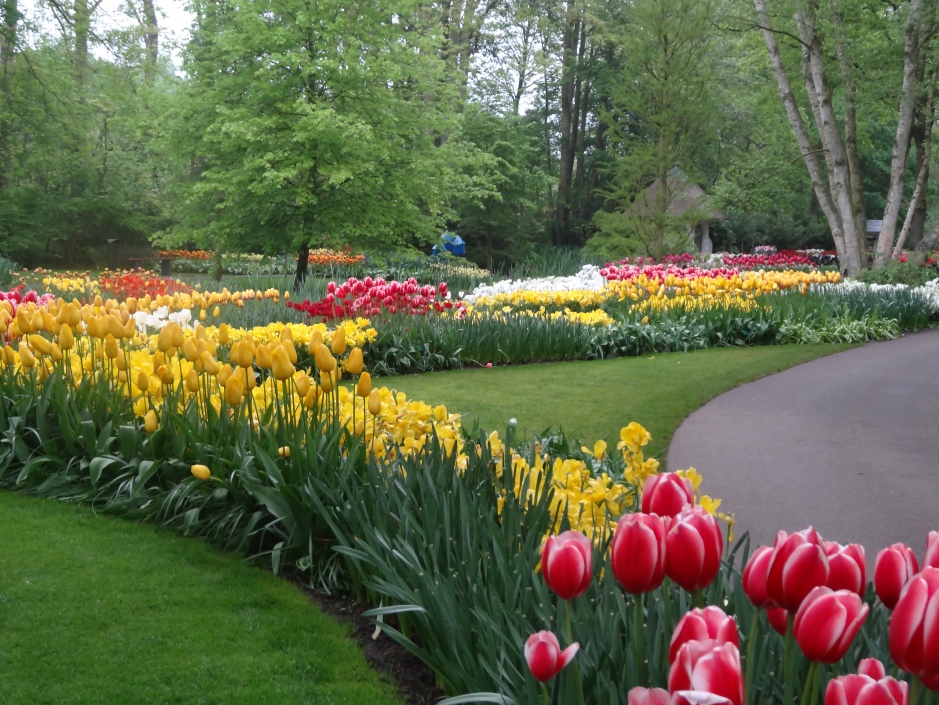 There are wide open areas with vast blocks of colour,  (the bulbfields can be visited separately by boat)

as well as the more intimate areas, the size of an average back garden, styled to give inspiration to the domestic gardener;

as well as the formal walled historical garden 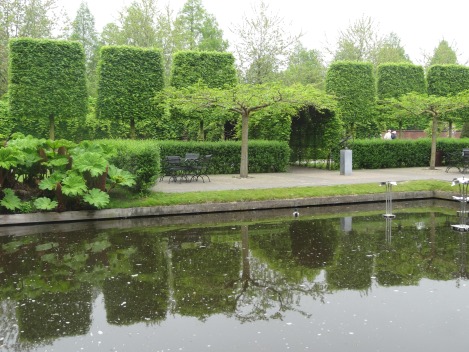 and the stepped canal surrounded by topiary.

At 8am, only the sound of birdsong from ancient trees and the rush of water from the many fountains, can be heard. This is the best time of day to be here. By midday, vast numbers arrive, though most disperse quickly into its 32 hectares. 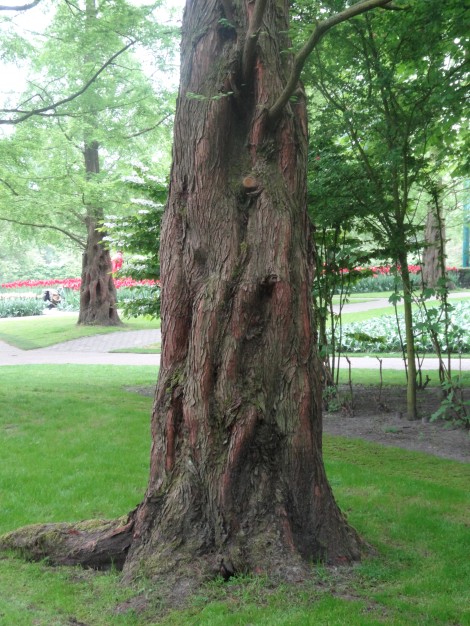 If you are a tulip lover this is the place to visit, armed with pen and paper to note the varieties which you will plant in autumn.

The tulips are well labelled and it is a chance to see the precise growing habit and colour, as well as how well they mix with others.

Since tulips are ‘early’, ‘mid-season’ or ‘late’, the time in Spring you visit will mean some are past their best whilst others will be in stunning full bloom. The best time to visit is mid-April, but of course it is weather-dependent.

Keukenhof Gardens were the 15th century hunting grounds of the Countess of Hainaut. It also provided herbs for the kitchen – hence its Dutch name “Keuken-hof” meaning “kitchen court”.

In the 19th century, the grounds were landscaped by the Zochers (makers of Vondelpark in Amsterdam). creating winding paths beckoning you onwards, with glimpses through to the lake.

Water is featured here a lot – formal fountains, the lake, rills and canals .. all providing opportunities for reflection.

After the Second World War, the parkland was suggested as a showcase for Dutch bulb growers to help kickstart the industry and so it has progressed from there.

Tulips need a period of cold dormancy in winter, “vernalisation”, cool springs and dry summers. They should be planted deep in well-drained soil. 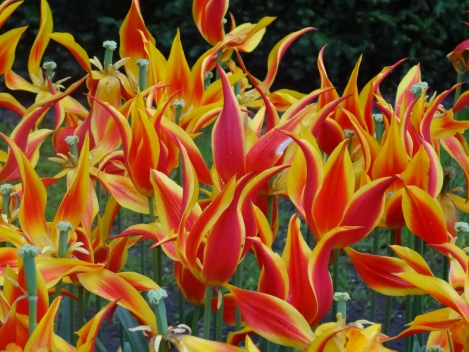 There are 15 categories/divisions of tulips, (though they are often classified by their flowering season), including Parrot, Rembrandt. Viridiflora, Kaufmanniana, Fringed, Lily-flowered … it’s their variety as well as the range of colours which is so appealing. So many yet to try!

Here are a few which caught my eye this year, as well as old favourites : 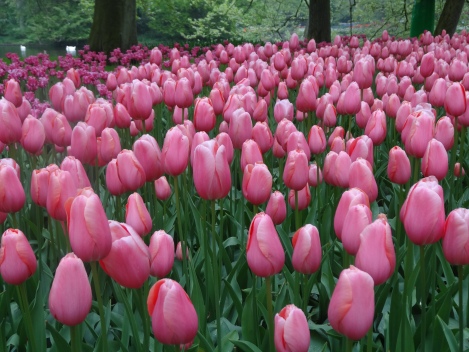 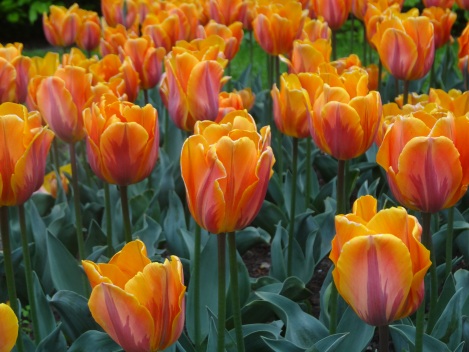 One of my favourites :
‘Prinses Irene’

Not to everyone’s liking, ‘Picture’ seems to have quite a small (though very pretty) flowerhead for its tall stem, but this would look elegant in a formal box-edged bed. 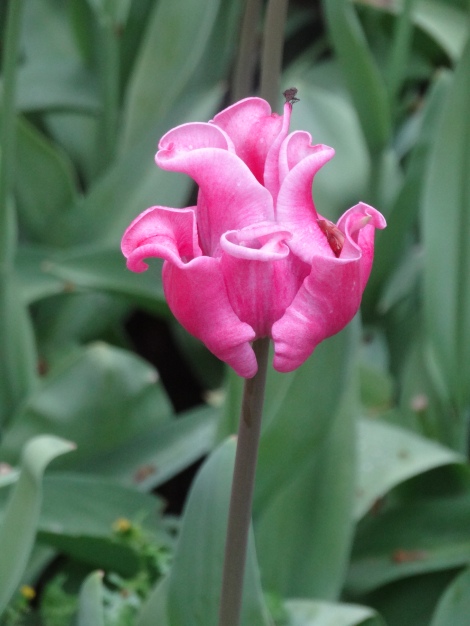 The bold colouring of Tulipa ‘Helmar’ looks great in pots.

The more subtle colouring of ‘Shirley’ and ‘Innuendo’

Some of you may have read an earlier post I wrote last autumn – “Tulip Mania” … many more beautiful tulips are featured there.

This autumn there’ll be a few more bulbs added to the mix. Colour is so important in a garden, especially in the Spring.

16 thoughts on “Is this the ultimate flower garden? Keukenhof.”