Bull Island started to appear on the northside of Dublin city in the early 19th century, as a result of dredging work and the construction of the breakwater, the Bull Wall. In time, the shifting sands clung to organic effluence from the city, marram grass grew and held the shifting sands to form the island, a haven of calm within sight of the city centre.

There is much history in this area. The waters around here were the site of a mighty battle in 1014, the Battle of Clontarf , which involved Brian Boru , Máel Mórda the King of Leinster and sundry Viking mercenaries. From the seashore, two squat round Martello Towers are visible, guarding the entrance to Dublin Bay, constructed by the British during the French revolutionary wars. In recent times, films such as “Michael Collins” and “Once”  have used the island as a location. 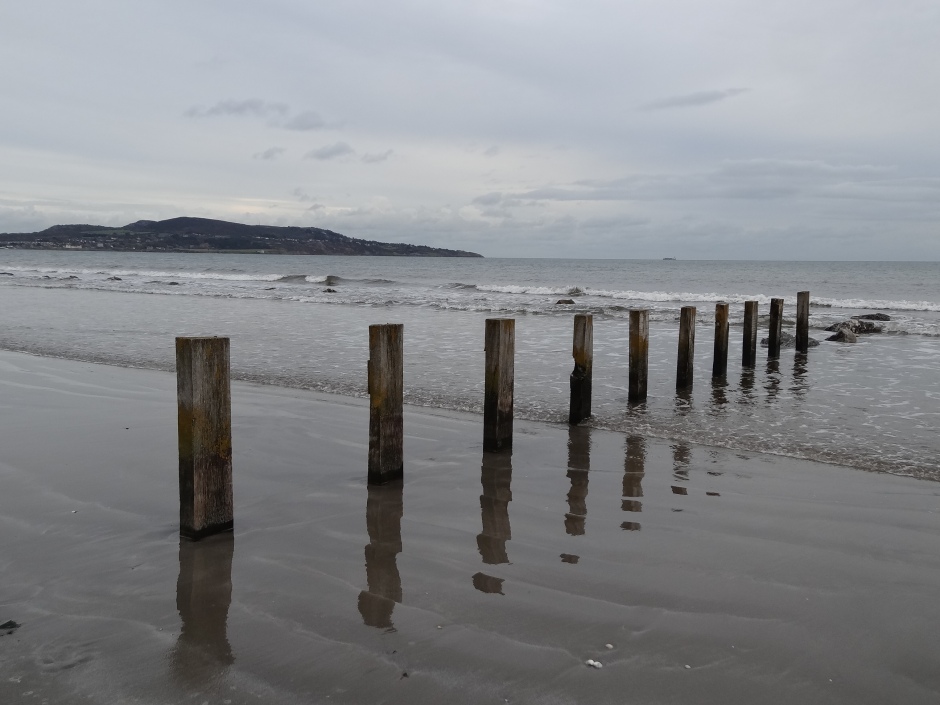 The view from Bull Island across Dublin Bay to  Sutton and Howth Head.

Today, on a chill but dry November day, I am visiting Bull Island with Green Communities/Dublin Community Growers at the invitation of Dublin City Council Parks & Landscape Service, where we all assemble at the Visitor Centre.

The Visitor  and Interpretive Centre

Niamh Ní Cholmain, Biodiversity Facilitator at DCC, explains the importance of  Bull Island’s rich biodiversity. Dublin is in fact the 10th most biodiverse city in the world and it is very fortunate that birdwatchers and local people campaigned decades ago to create Ireland’s first bird sanctuary here on the island, now a UNESCO biosphere reserve.

Looking across the marshland to the woodlands of St Anne’s Park.

So what is a Biosphere reserve? Simply put, it balances the needs of wildlife and humans, co-existing and enjoying the amenity in a sustainable way. A place where communities can come and learn and research.

Globally, biodiversity is in decline but in our own gardens we can offer a wealth of habitats to wildlife.

Learn more here about attracting wildlife to your garden.

Or about plants for pollinators here.

Bull Island has some unique habitats – dunes and slacks, mud flats and marshland. All within a stone’s throw of the city centre. 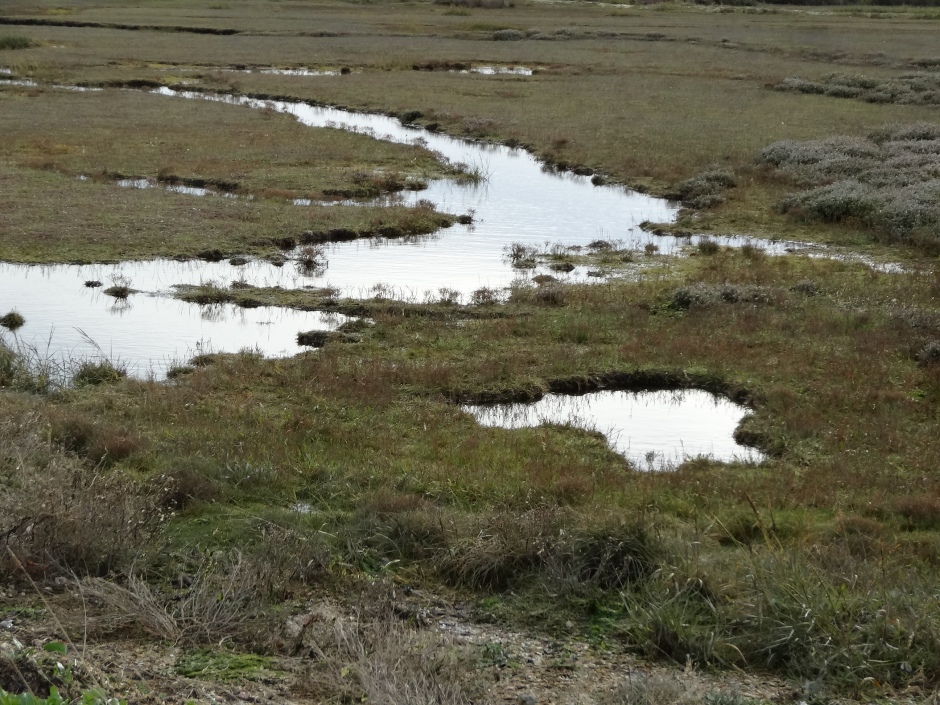 The 5km beach, Dollymount Strand, is a popular spot for Dubliners to take brisk walks or sit and watch the car ferries entering the harbour.

On the mudflats, many types of birds feed alongside each other quite happily as they are specialist feeders, not competing for the same food. We gather with our binoculars along  the causeway, the biting wind all but forgotten.

Robert Moss pointing out the birdlife

We spot the feeding groups of our winter residents, the Brent geese, having made their trans-Atlantic journey from arctic waters, in northern Greenland and Canada.

Shelduck numbers also swell at this time of year with newcomers arriving from the Baltic. There are snipe and redwings and snowy white Little Egrets. 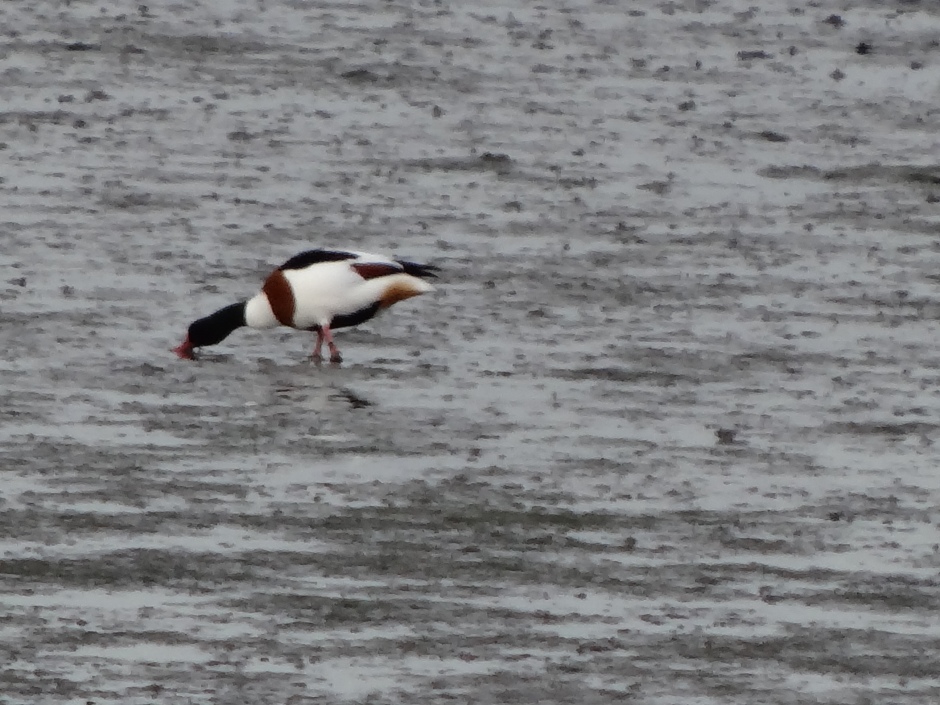 And we hear the plaintive call of the curlews, as they wade through the mudflats searching for crabs and molluscs with their distinctive curved beaks.

The island is also rich in insects, including the rare Marsh Fritillary butterfly, fauna and flora, such as Marsh and Bee orchids. 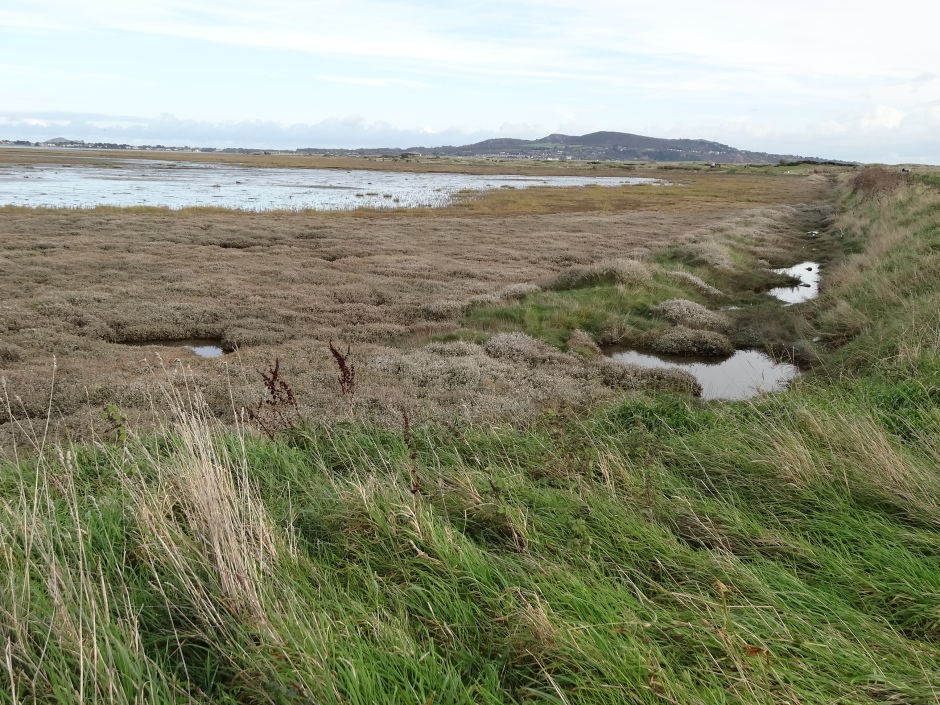 Managing biodiversity on the island has its challenges, as Niamh explains. The dense thorny bushes of the Sea-buckthorn were planted to aid stabilisation of the soil but have become invasive due to the dispersal of the berries by birds. The berries are high in Vitamin C and in recent weeks, DCC organised the foraging of them by volunteers, which was made into jam and even flavoured ice-cream. Alongside us, Conservation volunteers were working with thick gloves and loppers to reduce the number of Sea-buckthorn bushes. 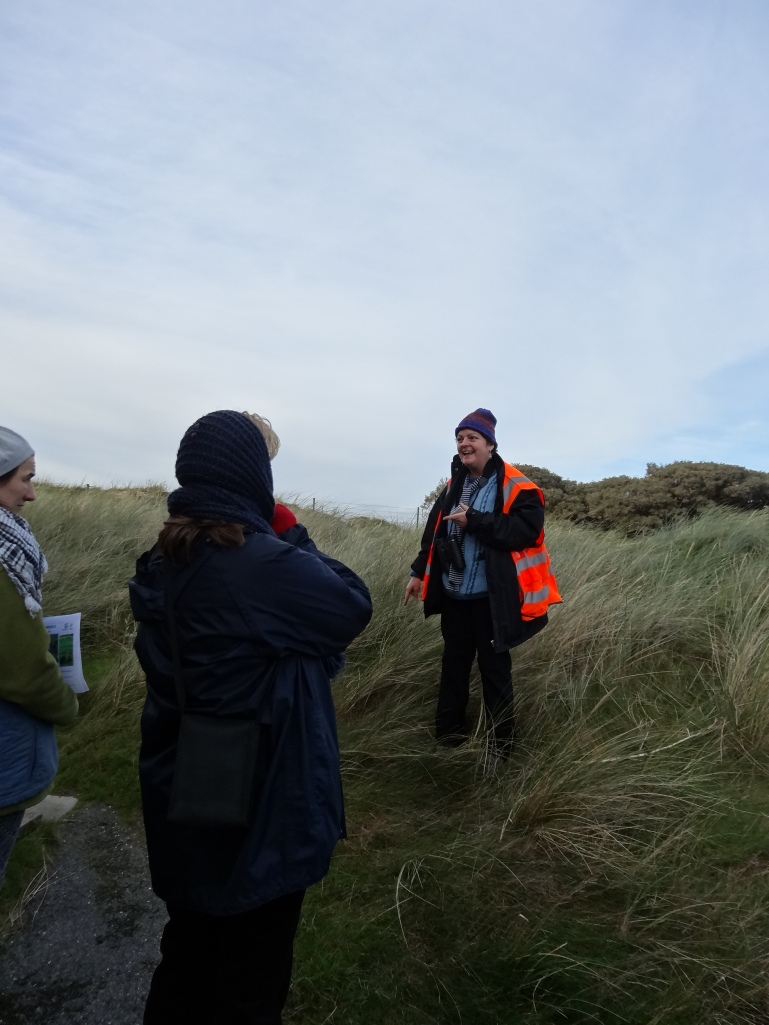 As the sun started to sink and rain-clouds gathered on the Dublin Mountains,

… we were left with much to reflect on the delicate balance between man and nature and the need to nurture our environment.

4 thoughts on “Biodiversity and Bull Island.”

Milly, the rescue dog I brought with me from Johannesburg, feels right at home in the barn veranda. The colourful Frida Kahlo cushions on the wicker chairs and the green rug I brought with me from Joburg too. #veranda #verandaliving #tombeboeuf #igersagen #lotetgaronne #oldfarmhouse #colombages #frenchfarmhousestyle
#tbt Four years ago today, we bought this old farmhouse in SW France. The first picture was taken one year ago & the second one 4 years ago today. There is now a swimming pool where the lawn was, flowerbeds and fountain where the road was, the out building has been renovated & provides dining and entertainment space in the shade by the pool, the hedges have been tamed to provide views of the surrounding countryside. A lot of hard work but worth it. Love rescuing old houses and gardens; this is my 14th I think. #frenchfarmhouse #lotetgaronne #igersagen #renovation #gardendesign #tombeboeuf #frenchcountryliving #oldfarmhouse
Poppies by the wheat field beside the house. The 3 cypress trees on the hill often feel like a beacon welcoming us home. #frenchcountryside #lotetgaronne
In the morning light, the view across the valley. #nouvelleaquitaine #igersagen #frenchcountryside #lotetgaronne
The scent from the dark red roses as one passes under the arch is amazing. Rosa “Le Grand Huit”. #roses #redroses #legrandhuit #frenchfarmhouse #igersagen
Another lovely waterlily from Latour-Marliac, interesting leaves too. #latourmarliac #lotetgaronne #letemplesurlot #waterlilies #nymphaea #nenuphar
There’s a very steep hill to climb when we walk from our house but at the top one is rewarded with this lovely view of the church and windmill at Tourtrès. #countrywalks #frenchcountryside #tourtres #windmill #moulin #igersagen #nouvelleaquitaine
Lilac shutters by the banks of the Lot River. #castelmoronsurlot #frenchvillage #shutters #nouvelleaquitaine #francelovers #igersagen
Waterlily season and these beauties were from my visit to the nursery at Latour-Marliac, founded in 1875 and where hardy water-lilies were first hybridized, suppliers to Monet’s famous water garden in Giverny. #latourmarliac #waterlilies #nymphaea #Monet #Giverny #nenuphars #igersagen #letemplesurlot #lotetgaronne #nouvelleaquitaine #total_gardens
Red geraniums in pots along the side streets of Castelmoron-sur-Lot. #castelmoronsurlot #igersagen #frenchvillage #aquitaine
Morning light and the view from the village of Tourtrès
Rosa “Madame A Meilland” or more commonly “Peace”, so named at the end of WWII. Not my favourite rose, I think because it is bi-coloured, but it is vigorous and disease resistant and actually quite pretty. #gardens #gardening #roses #Peace #rosapeace