Whenever I find myself in the north-west of England, I always try to find time to visit the beautiful Forest of Bowland. 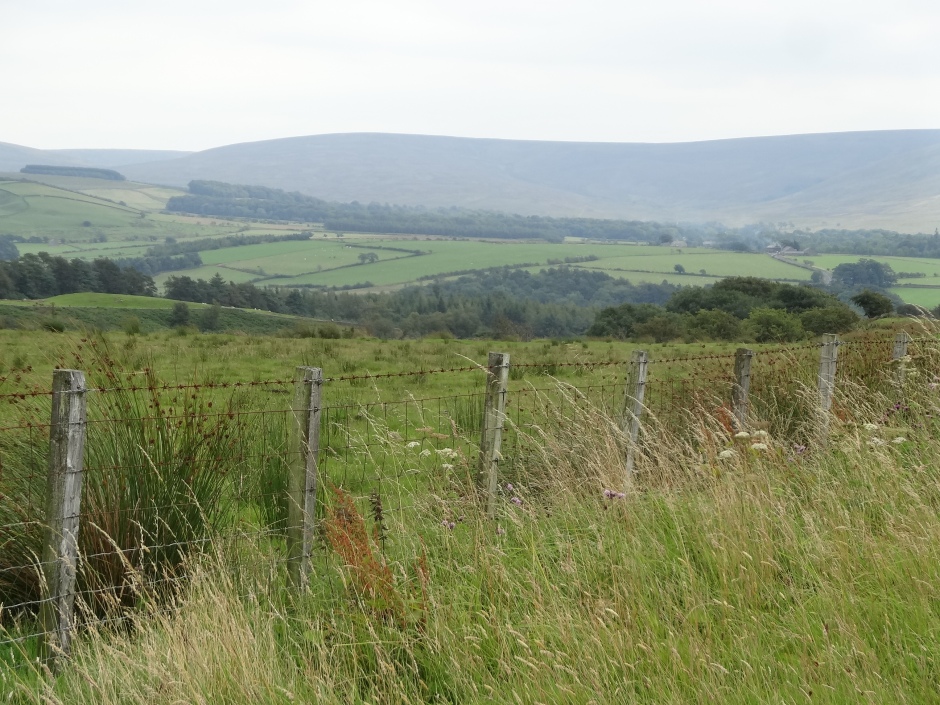 No, there are not many trees in this Forest; this is a rugged landscape of heather-strewn fells, which rise and dip, stone villages huddled in its valleys.

A final haven – the picturesque  village of Waddington.

Head north from the market town of Clitheroe, overshadowed by Pendle Hill, scene of the notorious witch arrests in the early 17th century, and across the fine River Ribble, to the picturesque village of Waddington, a final haven before ascending the long steep road to Waddington Fell.

At the top, we bounce over the first cattle grid, to the surprise of the hardy sheep grazing on this windswept moorland. The reward is the magnificent view of the Hodder valley displayed below,

The Hodder valley from Waddington Fell.

The first village at the bottom of the valley is the lovely Newton-in-Bowland. In spring, the approach roads welcome the visitor with 2000 daffodils, planted to commemorate the Millennium. 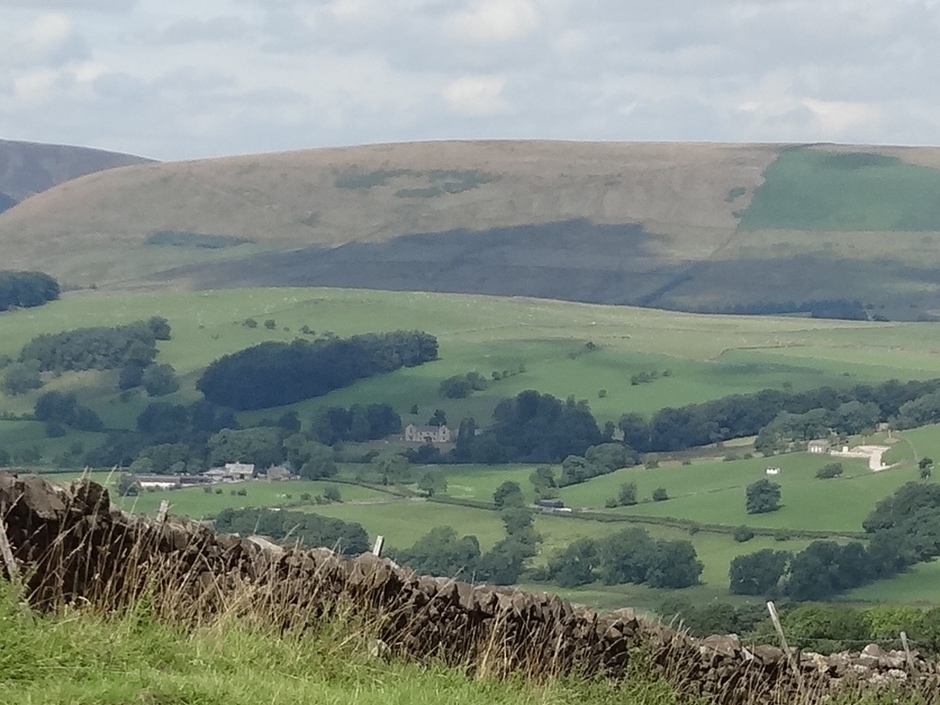 Today, however, mid-August, the village pub announces that grouse is on the menu.

The remains of the old Roman road, Watling Street, which ran from Manchester to Carlisle , can be found to the east of the village.

This was an early Non-Conformist village with a chapel founded in 1696. An old Quaker burial ground can be found in a quiet lane.

The road to Dunsop Bridge twists and turns alarmingly but the rewards are lovely views to the river Hodder below.

It’s not surprising that these rolling hills have been designated an Area of Outstanding Natural Beauty.

The steep arched bridge from which Dunsop Bridge takes its name consists of two simple arches. 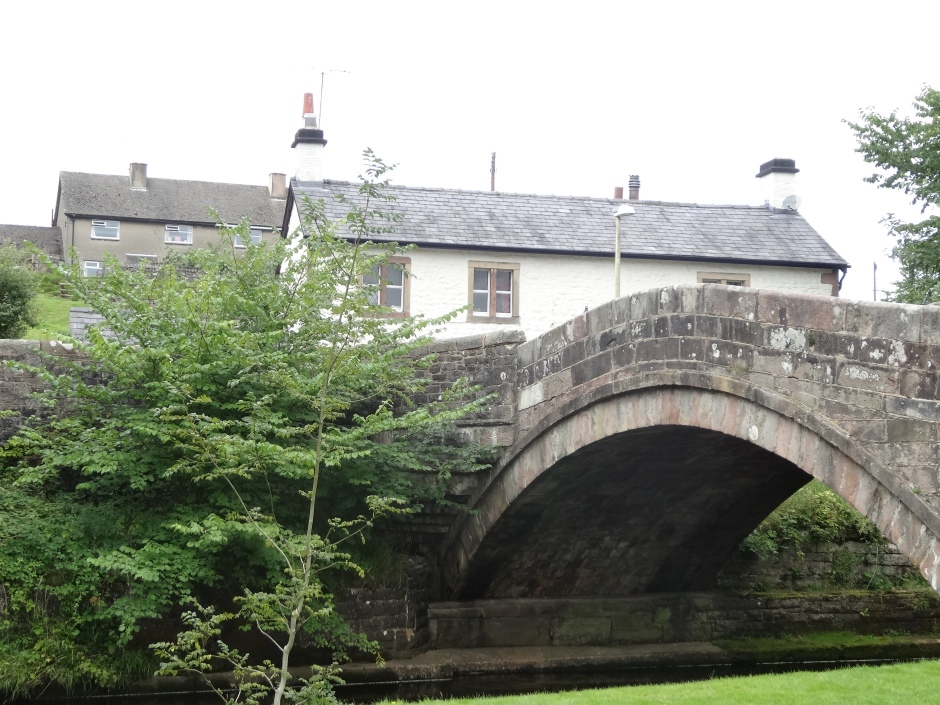 Puddleducks, the local tea room, shop and post office, lies next to the bridge, a pleasant stop for fell-walkers and duck-feeders alike. 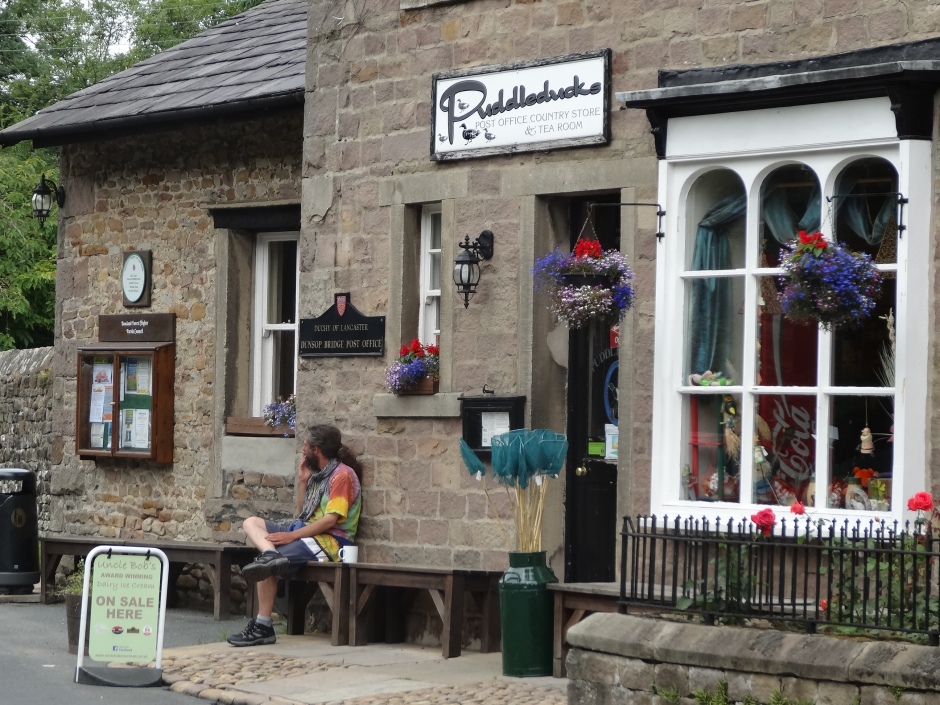 But it is the public telephone box on the little green outside which draws interest. A notice on its windows declares proudly that this is BT’s 100,000th installation … I wonder how many more have been installed subsequently! Open the door carefully, unused, it’s the haunt of spiders. 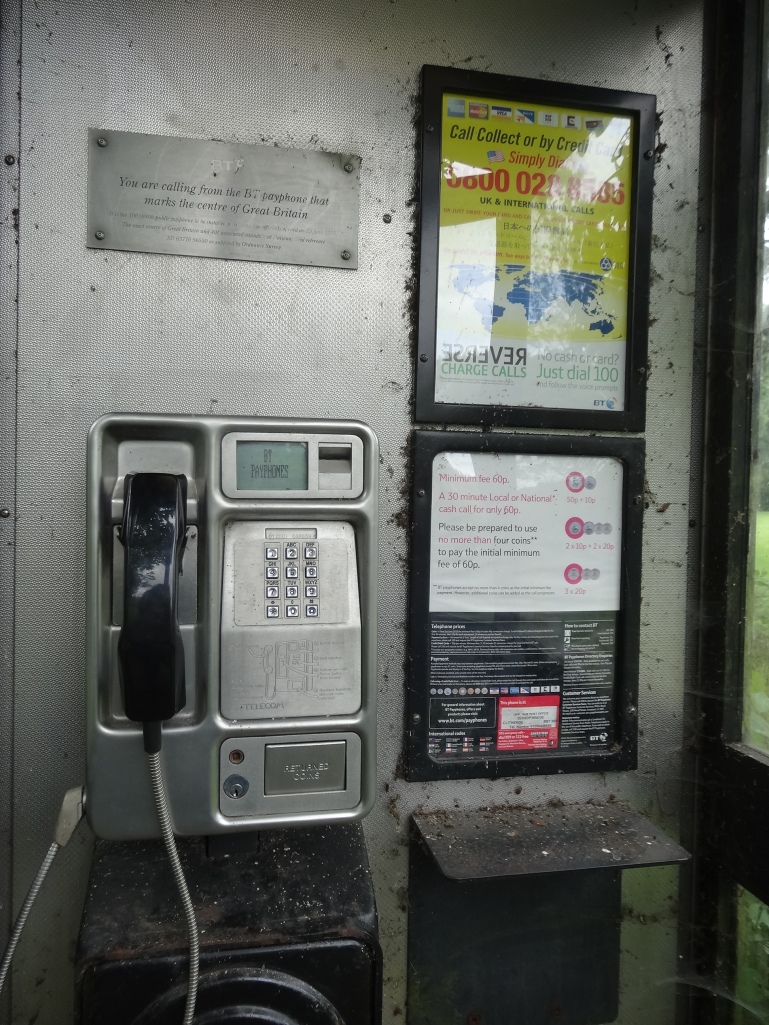 The geographic centre of Great Britain.

Unused, unloved, but this was once unveiled by the explorer Ranulph Fiennes (related to the actors of the same surname) to mark the Ordnance Survey statement that this represents the geographic centre of Great Britain. (although the actual spot is a few miles outside the village).

Strange to ponder this – we seem too far north? Too far west?  What lands and islands does Great Britain encompass?

Below is the plaque.

Much of the farmland around here belongs to the Duchy of Lancaster, ie, Elizabeth II, and it is said that if she had chosen to retire, then it would have been to the Forest of Bowland.

Who can blame her? The views are astonishing and the roads and villages very quiet.

At the other end of the village is the exquisite jewel of St Hubert’s Roman Catholic Church, its Pugin interior a haven of calm, and allegedly built on the proceeds of bets placed on local horse “Kettledrum” which won the Epsom Derby in 1861. 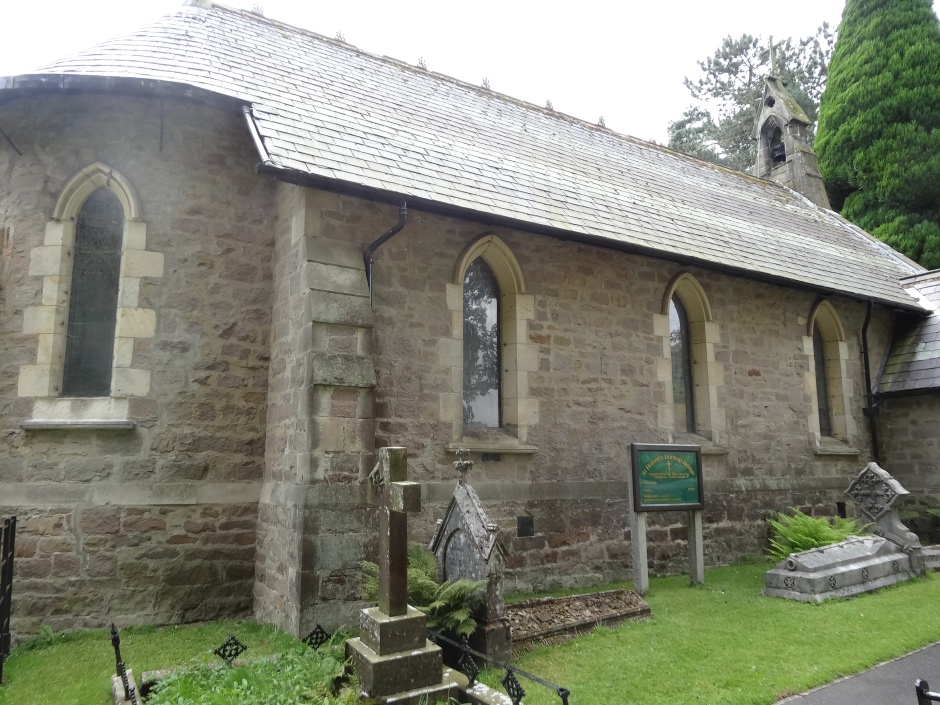 St Hubert is the patron saint of hunters, and as we paused, green Land Rovers filled with huntsmen pass on their way to the grouse shooting on purple-clad ,heathered moors above.

The Festival of Bowland events over the coming weeks include an Evening Bat Walk and Autumn Colour Walk.

The steep, narrow road now leads through the sparsely populated Trough of Bowland, Wyresdale and on to Lancaster. The purple heather is lovely, but too difficult to stop and photograph.

Driving through the narrow roads of the Trough of Bowland.

Every where there is evidence of the dry-stone wallers craft.

At times we pass through wooded glades with a bubbling brook, a perfect stop for a picnic.

At the far end of the Trough lies the home of renowned garden designer Arabella Lennox-Boyd, Gresgarth Hall.

Check ahead as sometimes Gresgarth’s lovely gardens are open to the public :

This is a landscape that reveals itself slowly; explore it on foot or by bicycle.

It doesn’t feel like the Centre of Great Britain, with its implication of being in the middle of things.

It feels more remote than that. Like the setting for “Wuthering Heights”.

That is its attraction.

It will always be for me my favourite part of England.

2 thoughts on “Journey to the Centre of Great Britain”

Mist rising in the evening light. #lotetgaronne #tombeboeuf #eveninglight
Evening light in the wonderful upstairs veranda of the Château des Vallons, much of It dating back to the Middle Ages. #verteuildagenais #chateau #chateaudesvallons
As the sun rises ... #yellowrose #mygardeninjanuary
#tbt The extraordinary topiary garden of the Château de Marqueyssac ,high above the Dordogne River, still looking splendid in winter. #marqueyssac #Vézac #Dordogne #topiary #chateaudemarqueyssac
Along the streets of Agen. #igersagen #windowboxes #Frenchtown #shutters
Blue shutters #verteuildagenais #shutters #blueshutters #lotetgaronne
In the evening light the ghostly shape of a pollarded tree, a common practice throughout the region, near the Mairie in this ancient nearby village. #frenchvillage #verteuildagenais #pollardedtrees
More scenes from the ancient streets and lanes of Prayssas. #Prayssas #lotetgaronne #igersagen #frenchvillage
In a village of winding medieval lanes and high stone walls, someone here has managed to carve out a little garden at the foot of their stone steps. #frenchvillage #medievalvillage #courtyardgarden #prayssas #igersaquitaine #lotetgaronne
More January flowers along the footpath ...
A beautiful iris flowering in the January sun along the footpath in a neighboring village #lotetgaronne #stbarthelemydagenais
Even in January there are roses flowering against the warmth of old stone walls. #roses #pinkroses #winter #igersagen