Imagine beds brimful of purple poppies, pink aquilegias, the heady scent of roses, as sensuous and romantic as their names – “Virginie et Perpetue”, ” Louise Odier”, “Madame Alfred Carriere” and the beautiful, thornless “”Zephirine Drouhin”. This is the garden created by Claude Monet at Giverny.

The Impressionist painter began his garden at Giverny in 1883. Today the restored garden is visited each year by 500,000 people, enthralled by lush planting, rich colours, waterlilies and pond reflections made famous in his many paintings.

On entering the garden, the Clos Normand sloping away from the house, one is drawn on by the overwhelming drama of the planting, following along narrow paths to explore further, and so the structure is not immediately obvious. But Monet ruthlessly laid down the bones of his garden first; box-edged beds were demolished, trees felled or pruned and wagonloads of topsoil brought in.

The “spine” is the sloping central avenue with its great rose-covered arches forming an airy tunnel along the central path.

To the east and west of this avenue, the beds are laid out in strict geometric form: oblong and round in front of the house, rectangles to the east, squares in the west. Nothing is haphazard – he was creating the subject of his paintings.

The facade of the house is covered in Virginia creeper and Monet’s favourite climbing rose, “Mermaid”, seen here scrambling round his bedroom window.

It is the skilful use of colour which impresses – monochrome blocks of solid colour lead from one area to the next , crimson to mauve, saffron to bronze.

Irises were Monet’s great passion but the seasons unfold with something beautiful throughout the seven months the Garden is open. Scillas, crocuses, primulas lead on to narcissi and tulips; then peonies and irises followed by the summer perennials and roses. 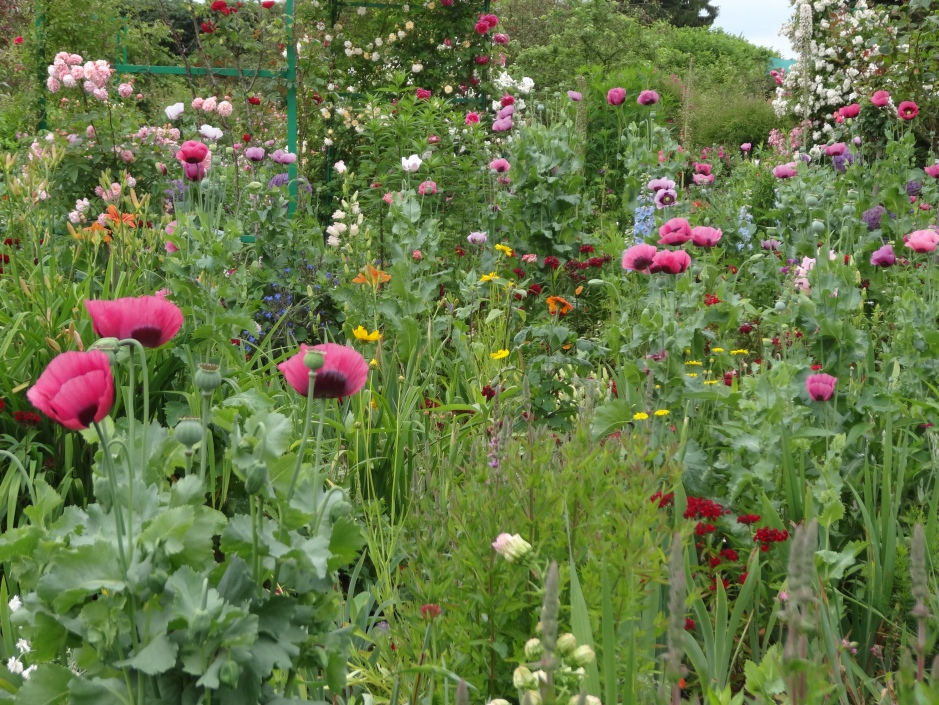 In time, Monet went on to develop his famous Japanese water garden, approached now by a tunnel under the road. Bamboo stands guard as one enters a garden with a very different atmosphere – the colour and movement of the Clos Normand gives way to a tranquil lake.

The lake is surrounded by trees, mounds of waterlilies floating on the surface, and traversed by the famous Japanese bridge, at its best when the wisteria is flowering.

The water is controlled by sluice gates near the little bridge, the special Giverny turquoise-green paint repeated here too. 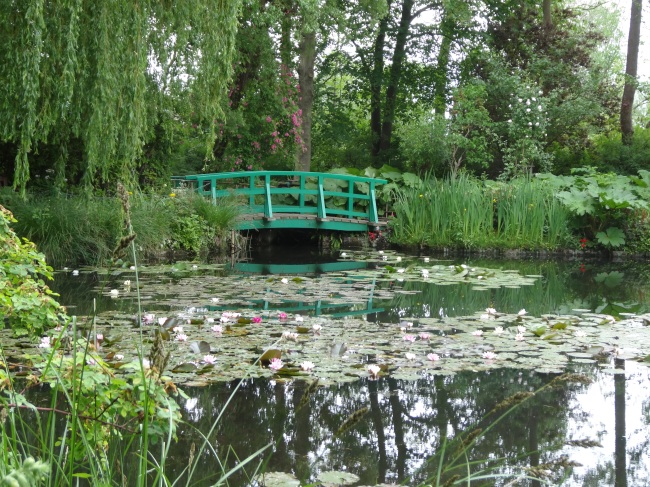 t is this water garden which preoccupied Monet over a number of years as he sought to record those tantalising reflections. 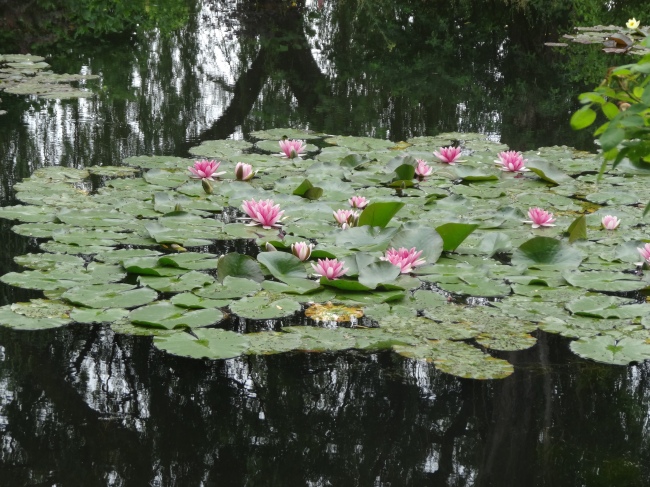 So what can we learn from this inspiring garden?

Firstly, it’s important to remember how much thought and effort went into the planning and preparation – before anything was planted. There is a strong underlying geometric structure underlying the garden.Effusive planting underpinned by good bones.

Secondly, water is a desirable element in any garden; still water adds a contemplative quality, even a simple small pond next to a bench adds an extra element to your garden.

Colour, colour,colour. All white schemes, though tasteful, can lead to a jaded palette. Think about injecting a bit of colour into your garden, but take care with combinations of colours. Monet planted largely monochrome blocks; try his toning shades of pinks and purples,or blues, creams and mauve. And take inspiration from the colourful paintwork at Giverny, noting that repeating the colour gives a more cohesive look.

More to come on using colour in your garden ….

Some places you can see Monet’s Giverny paintings:

15 thoughts on “Monet’s garden at Giverny.”

Irises come in so many colours, it’s no surprise that Iris was the Greek goddess of the rainbow 🌈
There are 3 plants I never want to be without ... alliums, verbena bonariensis and euphorbias, all three fortuitously in this pic taken yesterday in the garden.
Fascinated by the changing colours - orange fading to purple - of the Erysimum ‘Winter Orchid’